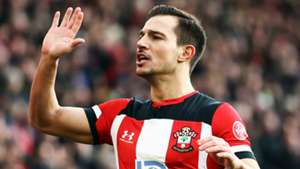 Arsenal have completed the signing of Cedric Soares from Southampton.

The right-back has arrived on loan until the end of the season, when his current deal with the Saints will expire. Arsenal have an option included which could then see them hand the Portugal international a four-year contract in the summer.

Cedric becomes the Gunners' second new addition of the transfer window, following on from the arrival of Spanish centre-back Pablo Mari, who joined on loan from Flamengo.

Arsenal have paid Southampton a loan fee of just under ?1 million for the 28-year-old and will cover his wages for the rest of the campaign, which are believed to be around ?65,000 per week.

The addition of a new right-back will be a boost for Mikel Arteta, who doesn't have a like-for-like replacement for Hector Bellerin in his squad.

He has used Ainsley Maitland-Niles, a natural central midfielder, in that role at times while Calum Chambers would have been an option, but he has been ruled out for nine months having ruptured the cruciate ligament in his left knee.

Cedric will also bring some versatility to Arteta's squad, as he can also operate on the left side of a back four.

"Cedric is a defender with good experience of the Premier League, and of course at international level," commented Arsenal's technical director Edu.

"He is another strong addition to our defensive unit who will provide our squad with quality. I know he is a player who plays with absolute full commitment and energy.

"We are all looking forward to going into the last stages of the season with Cedric as part of the club."

Arsenal fans may have to wait a little bit longer to see their new signing in action, however, as he is currently suffering from a knee problem which is expected to keep him sidelined for another three weeks.

Arteta's side face Burnley at Turf Moor on Sunday before heading to Dubai for a mid-season break. They will return to action on Sunday, February 16 when Newcastle United visit Emirates Stadium.