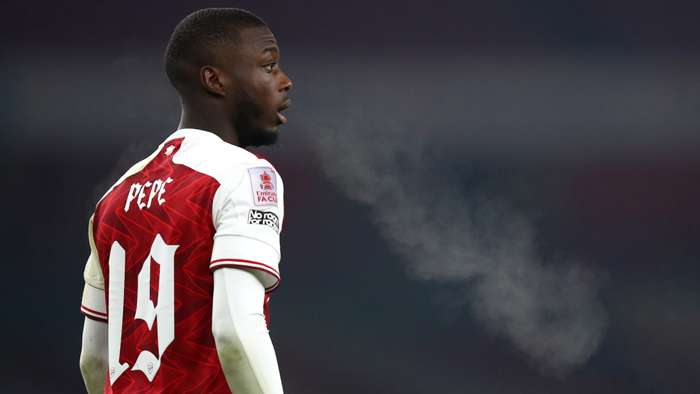 Mikel Arteta has vowed to help Nicolas Pepe succeed at Arsenal, with the Gunners boss confident that the out-of-sorts winger can avoid becoming a £72 million ($97m) flop.

Despite being at Emirates Stadium for 18 months, Pepe is yet to convince and make the impact expected of him when he completed a big-money move from Lille.

There have been flashes of brilliance, but serious questions have been asked of the Ivory Coast international’s ability and attitude.

Arsenal’s patience with an expensive asset can only stretch so far, as they seek to establish much-needed consistency as a collective, but Arteta will continue to give Pepe time.

The Spanish tactician told reporters after seeing the 25-year-old put in another forgettable display in an FA Cup third-round clash with Newcastle: “We need to help him to (succeed).

“In order to do that he needs minutes, he needs consistency in the team and when he has that, he needs to show he is capable of doing it.

“Let's see how the next few months develop.”

Pepe was replaced against Newcastle in extra-time, with Arsenal requiring a late rally from Emile Smith Rowe and Pierre-Emerick Aubameyang to secure a 2-0 win.

The Ivorian saw his touch and finishing desert him again at times versus the Magpies, but Arteta is reluctant to pick fault with those who have not been seeing regular starts of late.

He added: “I think it is hard to make judgement on some players that haven't played many minutes over the last two or three weeks and to throw them in and expect them to be the best player on the pitch.

“I don't think it happens and Nico tried. He tried all the game and had some really good moments - moments where he could have scored two or three goals.

“In a normal circumstance and with his ability in those positions, he puts the ball in the back of the net. He didn't do it but I think his contribution overall was good.”