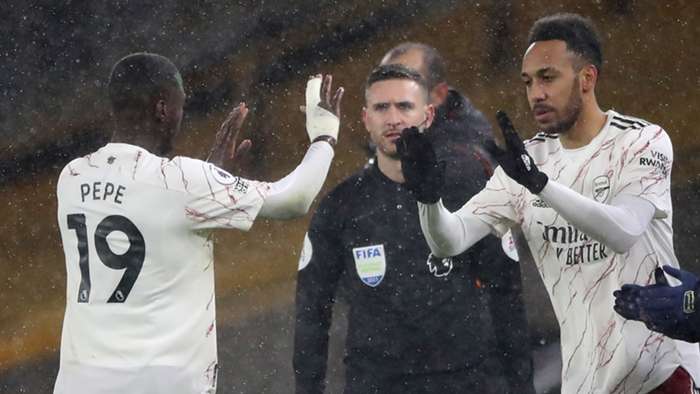 A couple of weeks ago Nicolas Pepe’s Arsenal career was at a crossroads.

And having alreadyseen summer signing Willian take his place on the right side of the Arsenal attack, Pepe had also fallen behind Bukayo Saka in the pecking order as well, with the teenager moving across from the left by Mikel Arteta.

Disappointing displays in the FA Cup ties against Newcastle and Southampton only added to the concerns over Pepe and the direction that his Arsenal career seemed to be heading.

But then a family emergency forced Pierre-Emerick Aubameyang to take a leave of absence from the Arsenal squad. Suddenly Pepe found himself presented with an unexpected opportunity.

He was brought back into the side by Arteta, but instead of lining up on the right of the attack he replaced Aubameyang on the left.

It was a surprising move. The Ivory Coast international’s main strength has always been seen as his ability to cut inside onto his left foot and get shots away, but it was a movethat proved to be a masterstroke.

Pepe scored Arsenal’s equaliser in the 3-1 success at Southampton and produced a sparkling display, one he has since gone on to repeat against Manchester United and Wolves during the past week.

He was on the goal trailagain at Molineux on Tuesday night, scoring a fabulous individual effort and producing a performance that had his manager purring.

“If you ask me personally what I think of the performance he put in overall, in all the phases of the game, I think it is the best he has played,” said Arteta.

A look at Pepe’s statistics against Wolves show why Arteta was so impressed.

The winger competed in 14 duels, more than any other Arsenal player, he had more shots on target than anyone else (two), made two tackles, a clearance and an interception during the 61 minutes he was on the pitch.

Arteta is a manager who demands a lot from his players, at both ends of the pitch, and on Tuesday night Pepe delivered in attack and in defence.

“His contribution to those aspectsis the best that he has done and he needs to sustain that,” said the Arsenal boss.

"Even when we made decisions not to play him, he kept working hard. He has improved in a lot of areas and has been much more consistent for 90 minutes.”

Pepe is known as a quiet character behind the scenes at Arsenal, a player who often needs an arm around the shoulder to bring the best out of him.

He is viewed as a free spirit, which is perhaps why you can hear Arteta constantly coaching him through games, telling him exactly where he needs to be, especially when Arsenal are defending.

“I don’t know how much he wants it, but he needs guidance,” admitted Arteta, when discussing Pepe in the build up to Saturday’s match at Aston Villa. “And he needs clarity in what he needs to do.

“Then he needs the discipline on the pitch to do what he needs to do. And obviously he needs the freedom in certain moments to express himself as a player. You can not restrict that for sure.”

There’s no doubt Pepe has struggled to deal with the £72 million ($99m) price tag he arrived with from Lille in 2019, but he has shown since his move to north London that he can add a real cutting edge to the Arsenal attack.

Although his opportunities have been limited this season, he has still managed seven goals and three assists from just 17starts in all competitions.

The way he has raised his game at atime when so many were writing him off is impressive, but the challenge for him now is to maintain the level he has shown recently - something he has never really been able to do at Arsenal.

He has always shown flashes of quality, but producing his best form on a consistent basis has always been a struggle for him.

And he now also has that presence of Aubameyang to contend with, with the Arsenal skipper fit and available again following his recent trip abroad to be with his ill mother.

The Gunners take on Villa on Saturday looking to bounce back from their defeat at Wolves in midweek and Aubameyang’s availability leaves Arteta with a big decision to make on the left-hand side of his attack.

Arsenal produced what was arguably their best 45 minutes of the season at Wolves in midweek before David Luiz’s red card turned the game on its head, with Pepe a massive factor in that performance.

But prior to leaving the squad to be with his mother, Aubameyang had scored four goals in six Premier League games and was starting to show signs that he was getting back to his best.

So should Arteta stick with Pepe this weekend, or does his skipper come back into the starting XI?

“We have to play the players who are in the best form and everybody has to earn the right to play and participate in the games,” said Arteta, when asked that exact question ahead of the trip to Villa Park.

That appears to hint that Pepe will keep his place and it would be incredibly harsh to drop the £72m man on Saturday, given the way he has performed in Aubameyang’s absence.

There is of course the possibility that both players could start, with Aubameyang also an option to replace Alexandre Lacazette as the central striker in Arteta’s 4-2-3-1 formation.

But the fact that Pepe’s inclusion this weekend is even a debate shows the strides he has made since the FA Cup defeat at Southampton on January 23.

Arsenal’s club-record signing was on the outside looking in just a fortnight ago and many were questioning whether his last chance had been and gone.