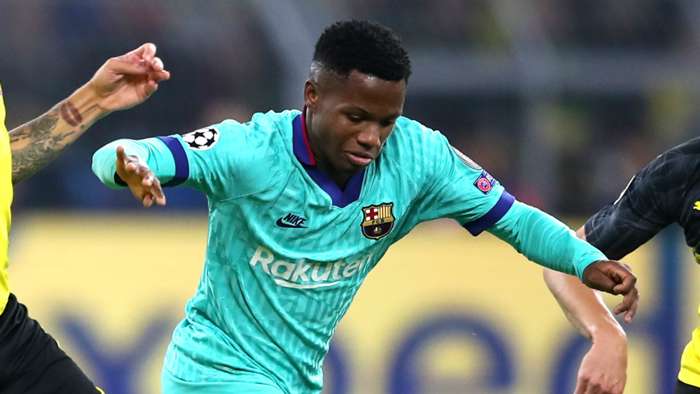 Barcelona reached 9,000 goals in all official competitions following their 4-1 rout of Villarreal in La Liga on Sunday.

Barca celebrated the milestone thanks to teenage sensation Ansu Fati, who came off the bench and scored the team's fourth goal away to Villarreal.

The Blaugrana added four goals to their league tally against Villarreal with the first coming in the opening three minutes of the match.

Barca'sblistering start and they were rewarded when Pau Torres turned the ball into his own net just three minutes in with Antoine Griezmann waiting to pounceon Jordi Alba's cross behind him.

Quique Setien's sidewere causing the home side all sorts of problems going forward but looked vulnerable on the break and Moreno levelled clinically against the run of play with 14 minutes played after Marc-Andre ter Stegen palmed away Santi Cazorla's strike.

Barca wasted little time in regaining the lead, though, Messi running from just inside the Villarreal half and beating two players before finding Luis Suarez, who picked out the far corner with a sublime first-time finish from the edge of the penalty area.

Arturo Vidal and Suarez came close before Griezmann added a third just before half-time, lobbing Sergio Asenjo with a superbeffort after Messi set him up with a cheeky backheel following another penetrating run.

The busy Asenjo denied Suarez and Vidal after the break and Messi had a goal chalked off after VAR ruled he had beenoffside before tucking in Sergi Roberto's cutback.