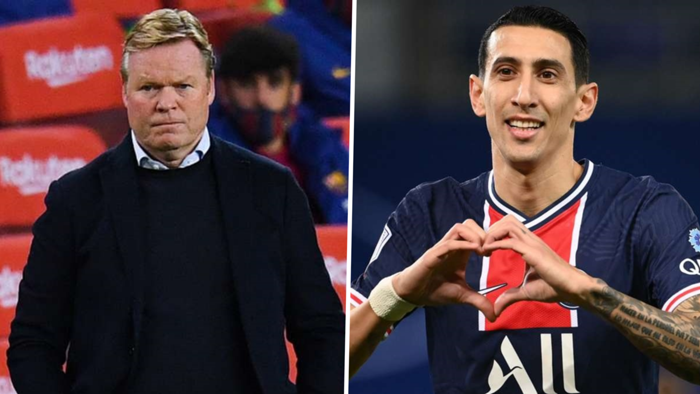 Barcelona head coach Ronald Koeman has hit out at Angel Di Maria over the PSG forward's comments suggesting Lionel Messi could join him in Paris next season.

PSGâ€™s sporting director Leonardo has opened the door to a move, telling France Football last month:â€śGreat players like Messi will always be on PSG's list. But this is of course not the time to talk about it, or to dream about it."

Di Maria echoed his sporting director's comments on Wednesday after his side's 3-0 win over Nimes.

"Yes, yes, I hope so," Di Maria told Canal Plus of a possible PSG move for his international team-mate. "There are many possibilities. We have to be calm and things will develop."

Koeman got word of those comments and speaking after Barcelona defeated Granada 5-3 in an extra-time thriller in the Copa del Rey, the Dutch manager accused Di Maria of being disrespectful.

"It seems to me a lack of respect. Someone can be wrong in saying something like that," Koeman said.

"It is not fair, I do not think it is respectful towards Barca to speak like that of a player who is ours. So many people from PSGtalk a lot about Leo, who plays for Barca.

"Besides, we have a tie against them," Koeman added, referring to the teams' upcomingChampions League last-16 matchup.

Koeman did express his delight with his team's performance on the night after Barca came back from two goals down in normal time and then scored three goals in extra time.

"It's incredible," Koeman added. "The football is incredible. I think we've done well. We had chances to win the game earlier.

"The team has been huge. In the last five minutes of the first half, we scored two goals. Then extra time was incredible