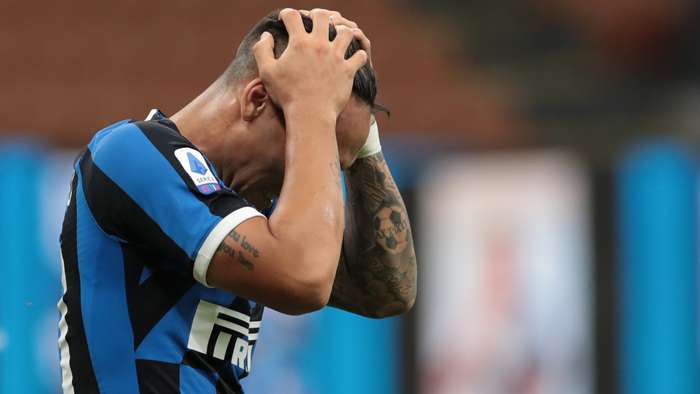 Lautaro Martinez was not one of Inter's six goalscorers on Wednesday, butAntonio Conte is remaining relaxed about the striker's struggles.

The Nerazzurri enjoyed a comfortable eveningas they thrashed bottom side Brescia 6-0 to move back to within eight pointsof Serie A leaders Juventus.

Ashley Young, Alexis Sanchez andDanilo D'Ambrosio all scored in the first half, withRoberto Gagliardini, Christian Eriksen and Antonio Candreva also on target after the break.

Conte left top scorer Romelu Lukaku on the bench for the first 68 minutes, and thoughMartinez was given a chance from the off, his failure to get on the scoresheet means he has just one goal across his past 10 appearances in all competitions.

Martinez, who has scored 12 times in Serie A this season and has been linked with a summer move to Barcelona, missed the target with two good chances and kicked the post in a clear sign of frustration when thwarted by goalkeeperJesse Joronen on another occasion.

"We can't hold anything against him, especially in terms of his commitment," Conte told DAZN of a player rumoured to be of interest to Barcelona.

"He deserved a goal and the personal satisfaction that comes with it. I'm very calm, I've got a great group of guys, professionals who want the best for Inter.

"Because of that, we can have flaws or get things wrong during games, but I'm still able to remain calm because of the professionalism and generosity of this group.

"My only regret this year is that we paid a big price for our naivety."

With Martinez having another off-night, and Lukaku only appearing for the closing stages, it was Young and Sanchez who shone at San Siro.

The two combined for the opening goal, one of two assists for Sanchez, who also scored his first Inter goal since September from the penalty spot.

The 31-year-old Chilean still looks a long way from the player who impressed at Arsenal prior to joining Manchester United in 2018, but Conte is pleased with the path the Inter loanee isnow on.

"We brought him here for his qualities," Conte added.

"Unfortunately, we lost him as an option for a long time. He's now starting to find his feet,even if he's still not the Sanchez I was such a big fan of in England.