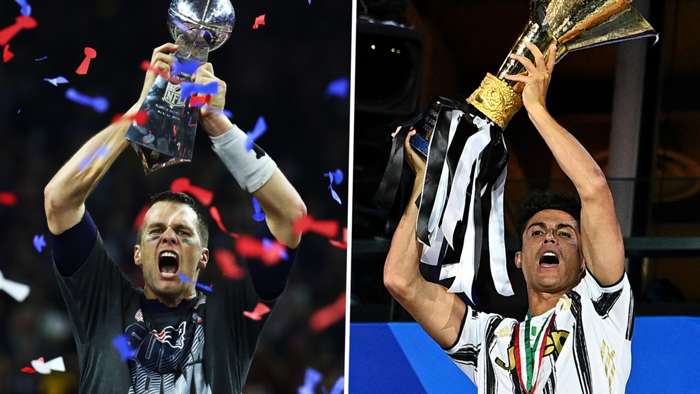 Five-time Ballon d’Or winner Cristiano Ronaldo can be compared to six-time Super Bowl winner Tom Brady because both men share an insatiable desire to “be the best”, says NFL Hall of Famer Morten Andersen, with two global superstars chasing down more honours in 2021.

Plenty would have Ronaldo and Brady sat at the very top of those charts, with it difficult to argue against such claims given what each has achieved at the highest level of their chosen profession.

Neither is showing any sign of slowing down, despite sporting logic dictating that they should have passed a career peak by now and be well on their way towards the warm embrace of retirement.

Boots will not be hung up any time soon, despite the obvious appeal of bowing out on top, with age merely a number to those who have dedicated endless hours of blood, sweat and tears to being the very best in the business.

Tampa Bay Buccaneers quarterback Brady, in his 10th Super Bowl appearance, is looking to lift the Lombardi Trophy for a seventh time on Sunday, with that challenge being taken on some six months past his 43rd birthday.

On the other side of the world, Portuguese talisman Ronaldo is pursuing a third Serie A title with Juventus and a sixth Champions League triumph after previously conquering Europe at Manchester United and Real Madrid.

He has just turned 36, with many tipping him to play on into his 40s, and his longevity could go on to rival that of Brady.

How do they do it? Former New Orleans Saints and Atlanta Falcons kicker Andersen has, in association with BonusCodeBets, told Goal: “Taking care of your body. Consistently, every day, taking care of your body and staying away from injuries. You’re dirt when you’re hurt, you can’t make the club in the tub - you’ve heard them all.

“You build your legacy by being healthy and performing at the highest level and performing consistently over a long period of time. That’s what Brady has done, he has weathered the storm and done it in all circumstances and proven that he’s the greatest of all time. The same with Ronaldo. You can say the same thing.

“But what they both have in common is that hunger to be the best and be uncompromising in their preparation, doing whatever it takes in the mission and the process. I don’t think they are results-oriented and are more process-oriented.

“They are much more interested in delving into the everyday grind. The grind of how do I become the best? What are the little nuances that make me different than a really good soccer player or a really good quarterback? What can I do that sets me apart and makes me a difference-maker? What can be the difference for me? That curiosity and that search for the next new thing – whether it is nutrition or supplementation or training or rest and recovery, whatever it is that they are looking for.

“And of course they have all the resources that they can possibly have. They have a better opportunity to get that done, but that’s what I find interesting when you compare Ronaldo and the Messis and the Bradys. Peyton Manning was the same, doing it for a very long time at a high level.”

It has to be noted that success follows Ronaldo and Brady around, with it no accident that United, Madrid, Juventus, the New England Patriots and Tampa Bay Buccaneers have dominated after acquiring unworldly talents.

The Bucs have been average for longer than many of their supporters would care to remember, but a winning mindset – one shared by the likes of Ronaldo – has been brought onto their books and raised a collective bar.

“They are both plug and play guys,” added Andersen.“What I mean by that is that you plug them into a team that is mediocre and that team all of a sudden becomes great.

“It’s happened with Ronaldo, when he’s changed teams. You have seen it with Brady. He changed to Tampa Bay, they were an average team at best and now they have a chance to hoist the Lombardi Trophy.

“They are plug and play players. I mean that as a compliment. What is the one thing missing if you look at a franchise and where do we have to go? We are willing to spend the money to get the very best, and that’s what Juventus did and that’s what Tampa Bay did. They are reaping the benefits.

“Juventus were already a good team, but Ronaldo brought an edge to it. The same with Brady, he has basically demanded with his behaviour and leadership that everybody raises their game. Accountability was perhaps not in the forefront with the Bucs prior to Brady. It certainly is now.”

Patrick Mahomes could be the next NFL star to transcend his sport and become a global icon, with the Kansas City Chiefs quarterback looking to help his side go back-to-back in the greatest show on turf.

Can he become a Ronaldo, Messi, Brady, LeBron James or Tiger Woods?

Andersen said: “He is a superstar and in the next five years we are really going to be able to write the script for Mahomes and where his legacy falls.

“It’s too early. He’s had wonderful success in his early going but let’s not kiss the baby yet. Let’s see what happens in the next five years, the next seven years with him. Let him play out the massive contract he just signed.

“If he finishes that with Kansas City and let’s say he has won four or five Super Bowls, then you can start comparing him to Brady – who will be in his 10th Super Bowl, who will be the first guy who has seven Super Bowl trophies.”

Who, then, will come out on top when Brady and Mahomes go head-to-head in Tampa on Sunday?

Andersen knows a thing or two about challenging for the NFL’s biggest prize and signed off by saying: “I’m going Mahomes back-to-back, 35-32, field goal game, high scoring with lots of offence – one of the most entertaining games that we’ve seen in Super Bowl history!”