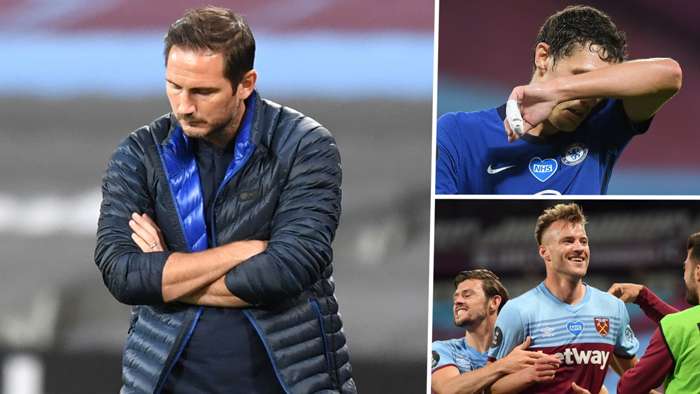 Ahead of the most unpredictable summer transfer window in living memory, Chelsea have done all they can to get a headstart on their rivals.

The signings of Timo Werner and Hakim Ziyech, who both officially became Blues players on Wednesday, have already led some to believe that Frank Lampard's side will challenge for the Premier League title next season.

But while the Stamford Bridge faithful have been licking their lips at the propsect of their club's new-look forward line, Chelsea's 3-2 defeat at West Ham offered a reality check at how much more they must improve defensively to close the gap on Liverpool and Manchester City.

Not since they were schooled by Bayern Munich in February hadLampard's side conceded three goals in a match, and the Irons are no Bayern when it comes to attacking football.

David Moyes' team had failed to score in each of their first two games since football returned from its coronavirus-enforced break while they remain without injured£40 million centre-forward Sebastien Haller.

At the London Stadium, though, the Blues were bullied at times, and deserved nothing from a shambolic performance at the back that casts doubt on their ability to hold onto their place in the Premier League's top four.

West Ham's equaliser in first-half stoppage time - a goal which came moments after Chelsea took the lead after Willian converted from the penalty spot -summed up the various issues facing Lampard as he goes about shoring up his backline.

The Blues cannot say they had not been warned about the threat of the home side from set-pieces, with Tomas Soucek having seen a goal ruled out by VAR earlier in the half after forcing the ball over the line at the back post from a corner.

Cesar Azpilicueta was clearly struggling with the task of marking the 6'4" Czech Republic international, and the Chelsea skipper was shown up again for the goal as Soucek towered above him to head home past a stranded Kepa Arrizabalaga.

More errors followed after the break when Michail Antonio, having seemingly been pulled to the ground by Antonio Rudiger, picked himself up to ghost into the heart of the penalty area and punish a flat-footed back four and goalkeeper.

Manuel Lanzini really should have made it 3-1 when played in behind the Chelsea defence, but, totheir credit, Chelsea did eventually respondto going behind.

Lampard felt his side had been "lucky" to beat Leicester City in the FA Cup on Sunday, and, just as the King Power Stadium, it required the ex-midfielder to make some substitutes to turn the game back in his side's favour.

The introductions of Ruben Loftus-Cheek and Olivier Giroud swung the momentum of the game back in Chelsea's favour, and they were rewarded with an equaliser after the impressive Christian Pulisic, who earlier had won the penalty with a direct run into the box, again drew a foul from which Willian expertly curled in a 25-yard free-kick.

Brazil international Willian, whose goals saw him become the first player in Premier League history to find the net in each of the 12 months of the year, has already been replacedas he prepares to end his seven-year spell in west London, with Ziyech the likeliest candidate to step into his shoes on the right-hand side.

But there are others in Lampard's squad who must now be wondering whether they will be retained as regular starters next season, particularly after the way the winning goal came about.

With the visitors pushing for a winning goal that would have lifted them above Leicester into third-place, they left themselves short at the back, with Christensen making things more difficult as he followed the ball into midfield after Antonio had held it up for his onrushing team-mates.

Marcos Alonso, whose place at left-back Chelsea hope will be taken by Ben Chilwell next term, then failed to track the run on Andriy Yarmolenko, leaving Antonio Rudiger one-on-one and unable to stop the Ukraine winger from cutting inside onto his favoured left foot and firing home.

"I think Frank Lampard will be fuming with the way Chelsea have defended at times today," said Ashley Cole in his role as aSky Sportspundit post-match, and though Lampard refused to single out his defenders himself, he surely must be thinking about potential signings that would help alleviate such errors.

Leicester and England star Chilwell is clearly their primary target at left-back, but there remains little clarity in terms of potential additions at centre-back. Instead they continue to monitor Bayer Leverkusen starlet Kai Havertz, suggesting that they are not yet finished adding to their collection of young attacking talent.

That, though, is all to come. First Chelsea must secure Champions League football for next season, and with Manchester United and Wolves both now just two points behind them, the final six matches of the season promise a thrilling conclusion to the top-four race.

After that, though, Lampard must address the issues facing his defence. Otherwise the signings of Werner, Ziyech and potentially Havertz will likely count for little.