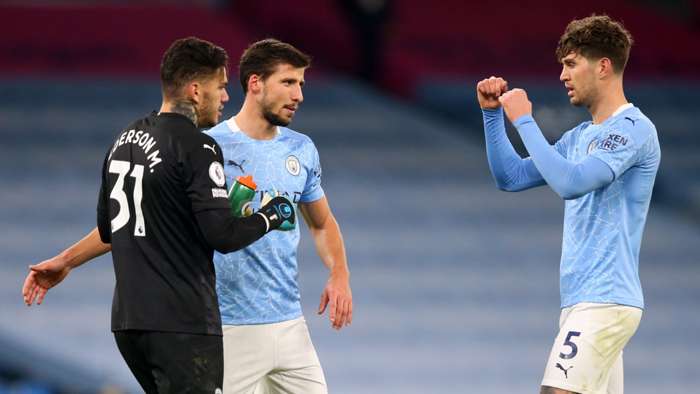 Ruben Dias and John Stones are forging a "formidable" partnershipaccording to Joleon Lescott, who says it is clear that the Manchester City duo have each other's backs.

Pep Guardiola's side surrendered a clean sheet late on during theircomfortable win over Chelsea on Sunday, but they still have two fewer in the goals against column than any other side in the division at present.

Theirlatest victory saw them move up to fifth in the top-flight standings, four points behind current leaders Liverpool having played a game less.

Dias and Stones played the full 90 minutes at Stamford Bridge, with the former continuing his bright start to life at City following his £65 million ($89m) move from Benfica in the summer transfer window.

Stones has been the perfect foil for the Portugal international since winning his place back in Guardiola's line up in November, and Lescott thinks their understanding is growing stronger with each passing game.

“The partnership with Dias andStones, it’s getting formidable,” the former City defender told the club's official website. “That comes with games and that’s a key element to any centre-back partnership, trust.

“I need to know that if I’m exposing myself for a slight second, you’ll have my back. They have that. You see them picking each other up and celebrating tackles like they’re a goal. We conceded but overall, that’s possibly one of the quietest games the goalkeeper has had.”

Nedum Onuoha echoed the sentiments of his old team-mate and expressed his belief that Guardiola now has greater strength in depth at his disposalthan his rivals at other top Premier League clubs.

"He’s good on the ball but is a defender first. It’s great he can play and has that confidence but how rare do you see a player who is high-fiving JohnStoneswho’s ended up in the stands for tackling Timo Werner?

“That is different, and that’s what City needed. For the last year or so people would look at City and think they could get at them, but to see Dias playing that well,Stonesplay that well and to knowAymericLaportecan come in there and others,teams don’t have that boost.