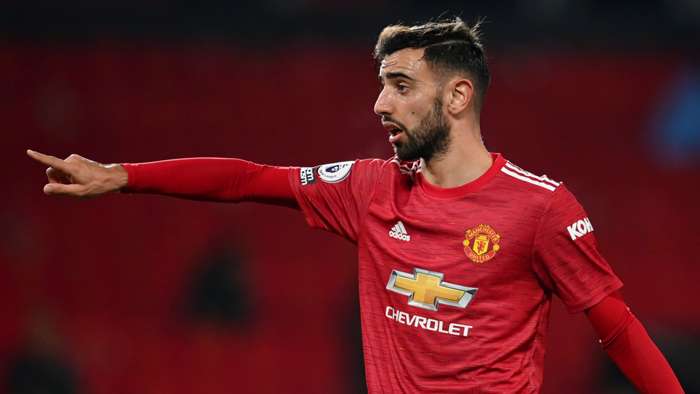 Bruno Fernandes “looks like a Manchester United captain”says Phil Neville, with the Portuguese midfielder being charged with the task of delivering major silverware to Old Trafford.

Fernandes has been involved in 33 goals for United in just 30 Premier League appearances. Only former Red Devils striker Andy Cole can claim to have bettered that return after the same number of games at the start of a top-flight career in England, with the prolific frontman registering 37 involvements.

Fernandes sits above iconic names on that roll of honour, with the legendary Eric Cantona only managing to score or tee up 27 goals.

Neville thinks that the superstar playmaker has quickly become a “leader” for Ole Gunnar Solskjaer, with the armband expected to come his way at some stage as United seek to get back on the trophy trail.

“Sensational,” was former United star Neville’s verdict on Fernandes when assessing his efforts forPremier League Productions.“I think the thing about that list of most goal involvements that stands out is the need to start winning trophies, to go along with those assists, that impact and those goals that he is scoring.

“Thinking back to when he joined 12 months ago, thinking that United were probably nowhere near Man City and Liverpool and even Chelsea, to now be joint-top of the Premier League, I think that’s a lot to do with him. That’s the impact he’s had.

“What I like about him is that he looks like a Man United captain. He talks like one, he is a leader on the pitch and he is keeping his feet firmly on the ground, which I think is really important.”