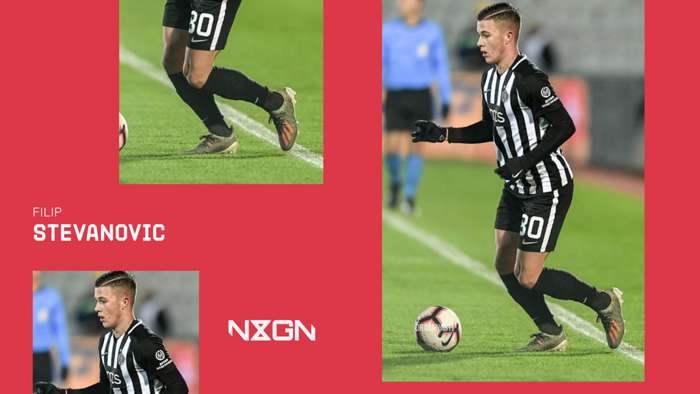 The notion of 'hot properties' in the world of football transfers is not a new one. Ever since tabloid newspapers began to pump out fresh rumour after fresh rumour, certain players have found themselves beingcourted by a handful of clubs.

If the latest reports regarding Partizan teen star Filip Stevanovic are to be believed, however, then he could be about to take things to a whole new level.

As many as 15of Europe's biggest clubs are said to be considering a move for the 17-year-old winger, including Manchester United, Real Madrid, Liverpool, Bayern Munich, Chelsea, Juventus, Manchester City, AC Milan, Borussia Dortmund and Inter.

"We have had an offer on the table for Filip Stevanovicfor six months now, which is over €10million (£9m/$11m)," Partizan coach Savo Milosevic toldTV Happy in Aprilas he discussed the changing landscape of the transfer market in a post-pandemic world.

"Now the deal will be much more complicated, but if the team can pick up from where we left off before the Covid-19 shutdown and he playsthe way he did in the autumn, then I am sure that the price will return quickly."

Milosevic need not have worried about his young starlet justifying his relatively hefty price tag. Stevanovic - whose current contract runs until 2022 - scoredfour goals in Partizan's final sevenmatches of the campaign following the resumption of the Serbian SuperLiga and Serbian Cup in early June.

Itnow seems only a matter of time before he leaves Belgrade behind.

Stevanovic'srun of good form to end the season means hecontributed ninegoals andthreeassists across 35 matches in all competitions for Partizan in 2019-20; a fine return from a player who had previously only made four senior appearances.

Having joined Partizan at the age of nine after taking his first footballing steps with hometown club Vranic Arilje, Stevanovic has spent the last decade making his way through the club's various age-group sides, with his first brush with fame coming as a 12-year-old in 2015.

In a result that made headlines in the Serbian capital, Partizan's Under-13s beat their eternal rivals, Red Star, 7-1. Stevanovic scored twice, and from there has been on the radar of many fans who attend the Partizan Stadium on a weekly basis.

Until the age of 14 he lived in his hometown of Arilje during the week before making the 380-mile round trip to Belgrade to play matches at the weekend. Once he took the decision to move to the Serbian capital permanently, he was there for just over a year before earning his first call-up to train with the senior squad shortly after his 16th birthday.

Whatever he did in training certainly made an impact, as in December 2018 he was summoned to make his first-team debut for the final eight minutes of a 3-0 victory over Rad.

"I can't describe my joy after my Partizan debut," he told the club's website after becoming the third-youngest player in their history. "I always dreamedof playing for Partizan. I graduated from the youth system and I know what it means to play for this club.

"To be honest, I didn't feel any tension before coming on,but I regret I didn't convert a late opportunity in front of goal. Anyhow, I'm just over the moon."

The teenager would go onto make a further three appearances during the 2018-19 campaign before his permanent promotion to Milosevic's squad ahead of the current campaign.

Due to his ability and willingness to play both as a winger and as a central forward, he has for a long time been likened to Cristiano Ronaldo in his native Serbia.

Stevanovic, though, has another player that he regards as his footballing idol.

"He Ronaldo is not among my favourites, but he is my role model when it comes to work and goals," he toldMondo."I don't like to praise myself, because I think others should do it, but I like dribbling the most. Dribbling is perhaps my best characteristic as a footballer. Cristiano is great, but he is not a dribbler.

"Ronaldinho, though, was magical and special. Of course, I wouldn't mind being like Lionel Messi or Neymar, but Ronaldinho had some magic. He had incredible control of the ball, could dosomething that no one else could -that no one even thought of."

Milosevic is clearly a fan of that willingness to dribble, with Stevanovic having been in his plans ever since Partizan began their qualifying campaign for the Europa League back in July.

The youngster scored his first professional goal against Connah's Quay in the second leg of their second-round qualifying tie, and followed it up three days later by marking his first league start with a goal against Macva.

"I congratulate him on his first goal, it's a great thing," Milosevic said of his strike against Connah's Quay, though he was quick to point out that Stevanovic would not be receiving any special treatment just because of his age.

"I have no further congratulations for him.I consider him a standard Partizan player. I am convinced that soon the whole of Europe will hear about him and that these goals will become a regular occurrence."

That they have, with Stevanovic potentially signing off from his boyhood club with a goal in the Serbian Cup final on June 24. If that does prove to be his final appearance in a Partizan shirt, then he will undoubtedly leave for one of Europe's most prestigious clubs.

Milosevic spoke in May of how he was "convinced" that Stevanovic would cost in excess of€10m when he does depart, and his performances as a 17-year-old would certainly justify that.