First-class Barkley is dedicated to the Chelsea cause and there's more to come, says Lampard 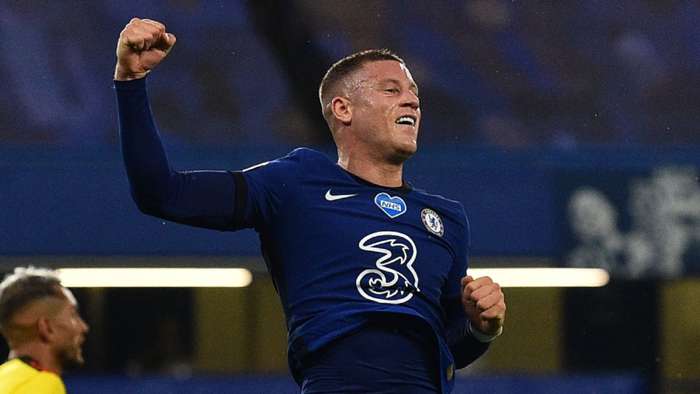 Ross Barkley has cemented his place in Frank Lampard's thoughts and isrewarding Chelsea and his manager with goals and assists, after notching both in the 3-0 win over Watford on Saturday night.

The 26-year-old set up Olivier Giroud's opening goal and then rounded off the scoring by hitting a left-footed shot past Ben Foster at thenear post to see his side reclaim fourth spot, after Manchester United jumped over them earlier in the day.

Lampard has been selecting Barkley regularly since just before the lockdown, and he now has three goals and five assists in his last 10 starts.

With the Blues battling for Champions League football against Manchester United, Leicester City and Wolves, Lampard has been impressed with the complete nature of the performances of his midfielder.

"I don’t think it is a new level for Ross. I played with him for England and against him. He has got great quality and I knew that. I think what he is doing is he is playing a very complete role," Lampard told reporters on Zoom at Stamford Bridge.

"His work rate, for instance, is great, recovering, jumping out to defend at times from midfield areas. Obviously, he always has that goal threat with his technical qualities: right and left foot, great strikes. I have seen that and Ross has been absolutely dedicated to the cause.

"Competition earlier in the season was tough. In certain games, you decide whether you want to be more offensive or not. That effected it and players have to fight their way into the team.

"Barkley and Mount were key against Watford, I think that was always going to be the case. I think when you pick the team, you look at the opposition and you know they want to defend in big numbers and are a counter-attacking threat but the onus is on us to break them down.

"We struggled just before Christmas in games doing that. With the technical abilities of Ross and Mason, I thought they were really positive today, it changed our game to get the ball through the lines for Willian and Christian. For themselves, they got higher up. It is absolutely key in these sorts of games."

Chelsea have won six of their last seven games, with a 3-2 defeat away at West Ham as the club's only black mark on their recent run.

Another challenge for Chelsea is the loss of N'Golo Kante to a minor hamstring injury, while Mateo Kovacic has already been ruled out of the upcoming Crystal Palace game with an Achilles problem.

Still, Chelsea's squad can handle the rigours of post-lockdown football which sees clubs playing three games a week. The likes of Jorginho and Michy Batshuayi haven't featured at all since the return to action following the coronavirus enforced stoppage in play.

Meanwhile, there are a host of others who have only featured infrequently. Lampard sent a message to those players on the fringes of his squad as he closes out his side's season in the league and cups.

"In terms of the changes, I have to make the calls where I see it," Lampard added. "We have a squad here that we can use. If I feel like we can improve it or change it; then there’s that element of freshness because we are playing so many games which is key.

"There’s also always a tactical element of how I want us to look, what the opposition look like, so yes, I am happy to change around the squad. The important thing from my part then is the players who change, are on the bench, and may have to train in the morning, stay really positive with the group so the spirit stays strong.

"I can’t pick all the players for the 20 man squad. If I make changes then they have to come in and do well or better and tonight was a good example of players coming in and contributing really well."

Having signed both RB Leipzig's Timo Werner and Ajax's Hakim Ziyech already, Chelsea have designs on competing with England's two best teams Liverpool and Manchester City in the near future.

However, they are stuck in a top-four battle and Lampard admits that his side will have to deal with pressure better than their rivals to achieve Champions League football next season.

"We are talking about top four being a success and for us as a club it is this year," he concluded. "We know we want to bridge the gap and challenge right at the top but those are the pressures that come with it. Where you are a younger group, the position that we are in is one we can improve on.

"In terms of how you deal with those pressures, sometimes maybe you can have individuals who slip or don’t quite perform so the rest of the group have to pull them through and fight for a result. There will be moments like that this season.