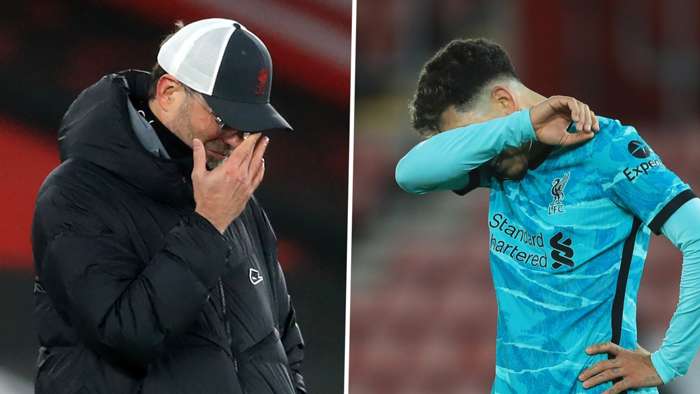 Here they are at the top of the league, still, but with problems. After a sloppy Christmas came a nervous New Year, and with it a second Premier League defeat of the season, a 1-0 reverse at the hands of Southampton, and their former striker Danny Ings.

Their away-day blues continue. Jurgen Klopp’s side have now won just four of their last 15 league matches on the road, and only two of nine this season. Imperious last term, already in this campaign they’ve dropped points against Fulham and Brighton, West Brom and Newcastle, Aston Villa and Everton - and now Southampton.

The form of champions, it most certainly ain’t. Liverpool would have hoped, given the festive fixture list, to have been clear at the top, but instead they have tossed away the advantage they grafted so hard for. They remain at the summit, but Manchester United and Manchester City will both overtake them if they win their games in hand.

And if that doesn’t sharpen the senses, United are the next visitors to Anfield as well.

It was a slow start that cost them here, Ings punishing his former club with an exquisite second-minute strike. Liverpool toiled – their dominance of the second half was almost absolute – but never recovered from that early setback. Having scored in their first 15 league games of the season, they have drawn a blank in their last two.

Concerning, to say the least. If they could point to the difficulty of breaking down a 10-man defence against West Brom, or some goalkeeping heroics up at Newcastle, there were no such excuses here.

They had all of the game but precious few chances. Time after time, they worked the ball into decent areas, pinning the hosts back. But time after time, the final pass was lacking. Too heavy, too soft, too high.

The culprits were everywhere. Mo Salah was sluggish, anonymous, way off the pace. Sadio Mane carried the fight and never stopped trying, but lacked precision. Roberto Firmino buzzed but rarely threatened, his best work coming in the wrong areas. Andy Robertson couldn’t find a telling cross, while Trent Alexander-Arnold, caught out for Southampton’s goal, gave the ball away 38 times, more than any player has in any Premier League game this season. And he was only on the field 77 minutes.

Liverpool had 16 shots but only one on target, failing to trouble Fraser Forster, the Southampton goalkeeper who was making his first league appearance since May 2019. The only effort he did have to deal with, from Mane, was a tame one.

Something is lacking with Liverpool at present, that much is clear. They remain a top side, but their sparkle has been missing. Since the feast at Crystal Palace a week before Christmas, it has been famine. Three games and only two points, 44 shots and only two goals.

That they sent Alisson Becker up for a 93rd-minute corner here said everything. That for some reason they took a 94th-minute corner short, allowing the referee to blow for full time, said even more. They did the same against West Brom. They’re not themselves. Not right now, anyway.

Perhaps that is understandable. The standards they set last season were never likely to be maintained this time around. They won 16 and drew one of their opening 17 league matches last term, their form magnificently relentless. The title was all but wrapped up by the turn of the year.

It isn’t now, though. They’re in a race now, and they have squandered control of it. They'll come again, for sure, but their rivals are smelling blood.

That Anfield date with United on January 17 looks huge now, doesn’t it? How Klopp needs his side to rediscover their mojo for that one.