Guardiola 'proud' of Foden after 'fantastic' strike to sink Chelsea 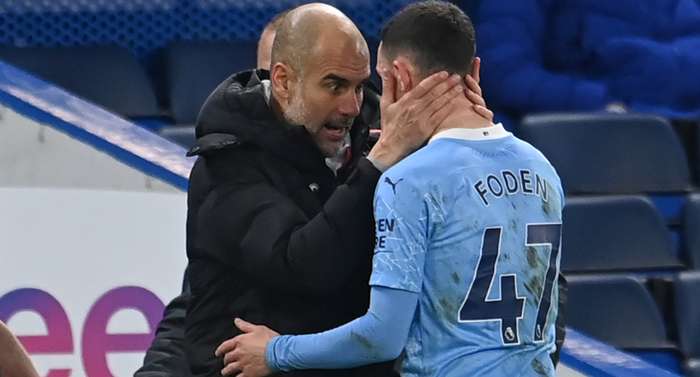 City were missing the likes of Ederson, Gabriel Jesus, Kyle Walker and Benjamin Mendy for the weekend's Premier League clash, but nevertheless proved too much for Frank Lampard's charges who were comprehensively outplayed over the 90 minutes.

Ilkay Gundogan, Foden and Kevin De Bruyne all found the scoresheet in the first half before Callum Hudson-Odoi netted a late consolation for the hosts, but it was the England international who stood out for his manager.

"So proud - he never dropped one bit of his energy he can play up front in all four positions," Pep toldSky Sportswhen asked about Foden's exploits.

"He has a sense of goal, he scored a fantastic goal. We rely on him incredibly, for England and the national team, he will be a top player because he's so clever and calm.

"He made another great performance today."

Despite Chelsea's subdued performance, Guardiola insisted that his team had to work hard for victory and that the game could easily have finished with another outcome.

"Chelsea press and push in the first minutes, we suffered a little bit because we didn't concede almost anything except the goal in the last minute but we played really well," he added.

"The result is excellent at Stamford Bridge but the way we play was really great you can't win titles without playing like that.

"Chelsea are one of the strongest teams,they are suffering from the last game but you see the quality of their players and the bench. We had a plan we tried to play like we have in the past and it worked.

"The players were excellent in every way especially with the ball. We cannot play like other teams, we have to play in our rhythm and attack in the right moment. We won titles in that way, more patient. We missed a bit of this tempo and today we had it.