Guardiola's toughest test yet: Can Man City boss emulate Ferguson and rebuild his own team? 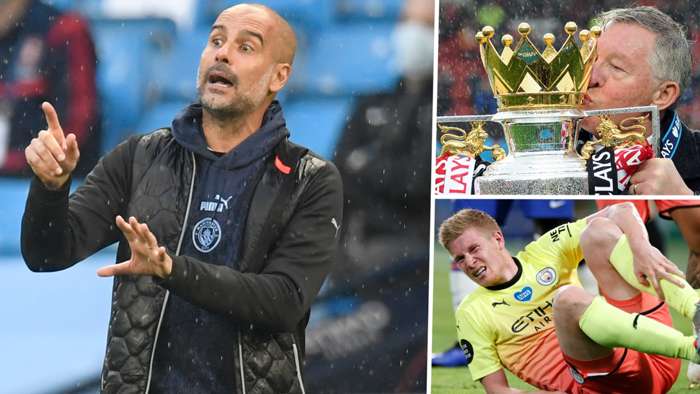 Next season will represent a new challenge for Pep Guardiola.

The Manchester City boss has never before started a new campaign as a former title-winning manager for the same club.

In his four years at Barcelona, Guardiola claimed the Liga crown at the first attempt and retained it twice. He had already announced he was taking a 12-month sabbatical from the game when Real Madrid dethroned the Blaugrana as champions of Spain in his final season at Camp Nou.

Three years at Bayern Munich then resulted in three consecutive Bundesliga triumphs and, after a third-placed finish in his maiden campaign at City, he delivered back-to-back Premier League titles, in 2018 and 2019.

So, when the new season gets under way – whenever that will be – one of Guardiola's sides will be trying to put themselves back on their perch for the very first time.

Such is the high turnover of managers at the elite level these days, many never get the opportunity to reclaim a title, as even a second-placed finish can be deemed 'failure' and, thus, result in the sack.

However, Guardiola has never been forced out by any previous club. On the contrary, he left both Barca and Bayern on his own terms. In addition, he has never been one for long tenures.

The upcoming season, though, will be his fifth at City – a significant milestone for Guardiola and one could that present him with the toughest test of his stellar coaching career to date.

Of course, Thursday night’s opponents, newly crowned champions Liverpool, will be the biggest obstacle standing between Pep and another Premier League trophy.

Jurgen Klopp’s side set a historic pace to clinch their first top-flight title in 30 years, and the noises coming out of Anfield suggest that the Reds will remain relentless in their pursuit of success.

There remains a belief at the Etihad Stadium that they can get the better of Liverpool – just as they did last season, when they pipped the Merseysiders to the title by a point.

However, there is an acceptance that tweaks will need to be made to the squad this summer.

At the start of the season, the City boss told his players to forget about the success of the previous two years and “start from zero”, but they have fallen a long way below their usual standard of excellence, as underlined by the fact that they have suffered eight league defeats already this season– more than their previous two campaigns combined (six).

Working under the Catalan is physically and mentally exhausting, and some players struggle to cope with that kind of intensity for more than a couple of years.

"I will be watching the rest of his season closely, just as my bosses have to decide whether I deserve to stay here,” Guardiola said in January. “With my eyes, I will look at the players and see who deserves to be here and what I need to do.

"I speak often with the club and we will take a decision after this. Everything in football is related to performance– it’s the same for me and the players.”

There was never a question that the club’s hierarchy would jettison a coach they hold in the highest esteem; one they would dearly love to stay beyond the final year of his contract.

However, as previously demonstrated at Camp Nou and the Allianz Arena, Guardiola has always been mindful of overstaying his welcome beyond the point where his players grow weary of his demanding nature and stop following his instructions.

There have even been moments at City when he has questioned whether that point has already been reached– not least during a frank exchange of views with senior players after a run of bad results over the spring.

However, he does not believe he has lost their trust, and the 2-1 victory at Real Madrid in February, when Guardiola risked an unorthodox line-up and formation, has only restored faith in the coach, his methods and their chances of Champions League glory.

In terms of next season, the arrival of a new centre-back, full-back and forward during the transfer window would undoubtedly reinvigorate and improve the squad, but Guardiola’s own approach will also be interesting.

In the past, he has been tough and uncompromising in his drive to improve players, performances and results.

However, after two draining, almost-flawless campaigns, he tried to adopt a more relaxed attitude this season. It has not paid off in the punishing Premier League.

“When you win everything, your players have great confidence in themselves, they believe that if they have managed to win two, three, four times, they can do it again,” he revealed after his first campaign with City.

“At the same time, there is a risk that they think they are better than they are, and you have to calm them down. And when you do not win, you have to be closer to them, empathise and make them understand that we can win next time.

"The advantage of managing these situations is that they are willing to let you help them.”

Guardiola has maintained he will not follow in the footsteps of Sir Alex Ferguson and Arsene Wenger, who both stayed at the same club for two decades or more

The legendary duo proved adept at rebuilding teams, particularly Ferguson, who won the Premier League in his final season at Manchester Unitedin 2013, 20 years after his first title triumph at Old Trafford.

Whenever someone threatened to end the Red Devils' reign, the Scot would lead them right back to the top.