Gundogan: One of Klopp's favourites who can settle title race for Man City 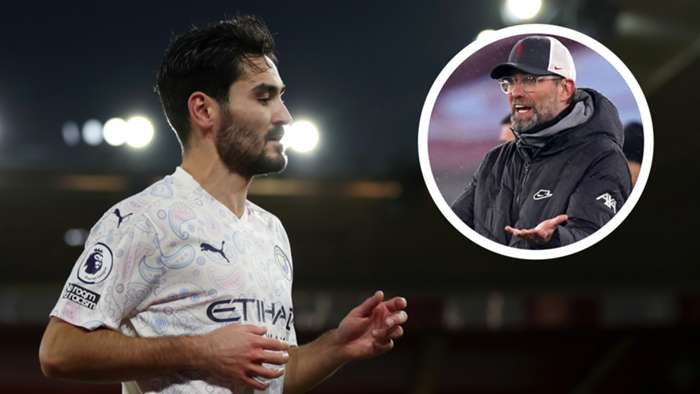 When David Silva left Manchester City at the end of last season, it was assumed that it would open up a regular starting spot for Phil Foden.

Gundogan has been an important player since he became Pep Guardiola’s first City signing in June 2016, but ahead of the crucial trip to Liverpool, the Germany international is nowone of City’s biggest threats.

In City’s last nine Premier League matches, the 30-year-old has scored seven goals to help firethem three points clear at the top of the table. Awin on Sunday couldrealistically knock Liverpool out of this season’s title race.

With Kevin De Bruyne out of the trip to Anfield as he recovers from a hamstring injury, Gundogan has suddenly become the man to stop.

And Liverpool boss Jurgen Klopp knows all about his talent, having taken Gundoganto Borussia Dortmund as a raw 21-year-old from mid-table Bundesliga rivals Nuremburg in 2011.

Gundogan immediately helped BVBretain their German title -the last won before Bayern Munich’s sustained period of dominance -and a year later to the final of the Champions League where he scored a penalty in a last-minute defeat to Bayern.

Breaking from his war of words with Klopp over the Liverpool manager’sclaim that City were benefiting from a two-break after a Covid-19 outbreak, Guardiola said the midfielder showed his quality in his rival's great side.

“He was already the player that he is now, maybe he is better for the experience that he has,” the City boss said.

“He took a penalty in the final of the Champions League, he took the responsibility and that shows his personality.

“He’s so intelligent and so clever as wellas having skills. I admire players that are intelligent, it means they solve things differentlyduring the game. That is why he’s a top-class player.”

That intelligence is also why Gundogan has the flexibility to play in different positions.

During City’s first title triumph under Guardiola, he often played as a deep-lying midfielder, dictating the rhythm and picking off passes like a quarter-back.

But as opponents have devised ways to cause City problems on the counter-attack, Guardiolaused amore orthodox defensive midfielder to disrupt and guard against fast breaks.

That has seen Gundoganplaying further forward, but with De Bruyne’s outrageous form, his impact can sometimes be forgotten.

The Belgian will miss the trip to Anfield but his absence won’t be as keenly felt with the recent impact of Gundogan.

Klopp recognises the dynamic midfielder from his days at Dortmund, if not the goalscorer he has become. Those nine goals mean this is already his best tally for a single campaign.

“Not at all surprised at his form.Goalscoring?Maybe a little bit!” the German boss joked ahead of the weekend clash.

“Ilkay was one of the best players I ever coached. He was a very young player when he came from Nuremberg to Dortmund, and especially in the 2012 season he was unbelievable. And he played then pretty much like he’s playing now.

“He had unfortunately some injuries, really tough injuries, but that’s now all sorted. This is the longest period he’s been able to play without being interrupted and I wish that can continue for a long time.

“He has always been this player. And when you are experienced and smart, then that’s another jump you can make on your performance level. I’m not surprised at all.”

Gundogan’s huge respect for Klopp is reciprocated and he was quick to send congratulations when his old bossended Liverpool’s 30-year wait for a title last season.

He has insisted that he has been very lucky to work under arguably the two best managers in world football but it is no coincidence with both admiring his attributes.

And he is playing possibly the best football of his career since stepping into the boots of Silva - boots that seemed almost impossible to fill.

Goals against Chelsea and West Brom came when he was the furthest player forward in a central area; freed by a fluent front five that is able to move all over the pitch.

In midweek, his assist for Raheem Sterling’s second goal came when Burnley missed him sneaking between the lines - just as the great Spaniard did -and into a wide position before firing over a perfect cross.

"There's not really a secret to my scoring," he said after his double in the 5-0 win over West Brom."I'm just in the right spaces at the right moment.

“I’m in a bit more of an offensive role, if I get the chance close to the box I try to make the right decisions - I just tried to do my best."