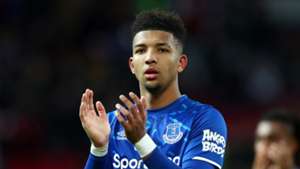 Everton defender Mason Holgate, reportedly a transfer target for Manchester City, has signed a new contract with the Merseyside club.

The 23-year-old defender has committed to a four-and-a-half-year deal at Goodison Park, keeping him with the Toffees until the summer of 2025.

Holgate has been a regular for Everton this season, making 26 appearances in all competitions and not missing a Premier League game since early October.

"This is my fifth year at Everton and my development as a person and a player in that period has been massive," Holgate told EvertonTV.

"The direction the club is going, it is a great club to be at and I am really excited about it.

"We want to move to the next step and push for bigger and better things.

"I want to win things - and winning some silverware is where I see us.

"It is definitely a positive time to be here and I am looking forward to seeing how far we can go."

Holgate had been linked with a move to City due to the defensive problems which have contributed to Pep Guardiola's side's stuttering form this season.

Part of Guardiola's desire for defensive reinforcements stems from the recent inconsistency of former Everton defender John Stones - who, like Holgate, initially joined the Toffees from Barnsley before impressing in the Premier League.

Everton are currently 11th in the table, following a controversial 1-1 draw with Manchester United on Sunday.

Manager Carlo Ancelotti has been hit with a misconduct charge from the FA following his angry reaction to Dominic Calvert-Lewin's late disallowed goal in that game.

However, Holgate is keen to contribute to the fighting spirit within the Toffees squad.

"Me personally, and I think I can speak for the rest of the boys, we're not going to get pushed over and walked all over if something's happening or needs to be said," he added.

"We need to stand up strong and be part of that, and that's not something that I'm scared to do.

"At the end of the day I want to win football games, I don't want to be someone's friend when I'm playing against them."