How Foden, Cancelo and Guardiola got Man City back to their brilliant best 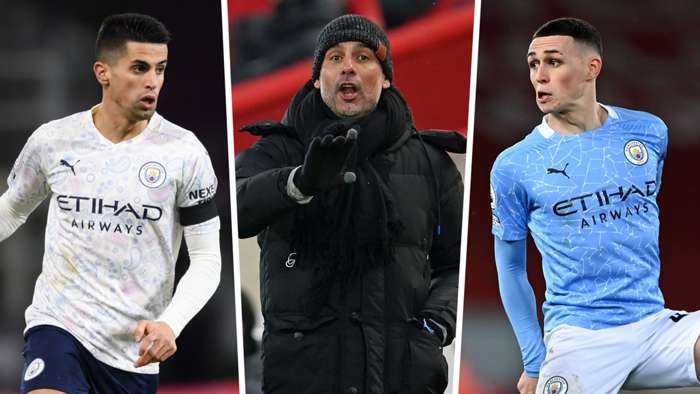 Manchester City's performance at Anfield had everything.

When they are in this kind of form,City glide about the pitch, swapping positions and cutting through the lines in a swirling pattern that achieves what all great art seems to: distilling an extraordinarily complex process into effortless, simple beauty.

A third league title in four years will surely follow.

It is not just that City are five points clear with a game in hand, or even that their rivals continue to stutter, but that Guardiola’s side have risen back to their immaculate peak.It is striking that City are both familiar and new, both rediscovered and reborn.

Phil Foden now carries the torch, Joao Cancelo drives midfield from right-back, and possession replaces pressing as the dominant form of control. And yetCity have built on these recalibrated foundations to once again create and conquer in the long-established Guardiola blueprint.

Covid-19 punted the Premier League back about 20 years. As the bloated fixture list severely reduced time on the training field and leftplayers exhausted, the defining features of the last half decade - high-intensity pressing, geek-out tactics - fell apart.

We are left with a Premier League season of vibes and dice rolls, of teams wafting about the pitch armed with vague ideologies rather than detailed battle plans. Games amble, players chug, and matches are won in the ‘moments’.

The pandemic has affected English football in the same way it has affected our lives in lockdown: matches have that tinge of endlessness, are gripped by boredom and brain fog, only to be punctuated by sudden erratic emotional moments.

Not so when City are playing, though.

The defining note of the season, and the one football historians will point to as the story of 2020-21, is that Guardiola worked out pandemic football faster than anyone else.

While rivals soldiered on, he recalibrated, shutting down the high-intensity pressing and swarm-and-conquer idea that has been prevalent (with country-specific tweaks) throughout his managerial career.

In its place, he dived head-first into a tactical style that was anathema to Guardiola precisely because the lazy caricaturists so often accuse him of it: tiki-taka.

City have doubled down on passes, on suffocation through possession, tweaking the system to seize control at a time when things seem uncontrollable; embracing the pandemic’s tediousness rather than fighting it.

The result is defensive steel and invulnerability to counterattacks, led by the decision to consistently field Cancelo as an inverted full-back who camps in central midfield.

His position turns Man City’s 4-3-3 into a narrow 3-2-2-3 in possession, magnetising everyone and everything towards the centre. Deploying a false nine also help draw play towards the middle, as does consistently selecting the most inverted wingers in the squad,Foden and Riyad Mahrez.

The effect is to perform one giant 'rondo' in the centre circle, sucking the life out of an opposition unable to break.

Unlike their rivals, City do not have loose transitions (the result of exhausted players pressing erratically) and thanks to the midfield guard suffer no hazy defensive lapses.

It turns out City’s wobbles in the first third of the season were all for a good cause, and now Guardiola has laid down a foundation designed specifically to adapt to the new normal,, allowing many of the team’s more creative and idiosyncratic elements tore-emerge.

In other words, with a defensive base feeling so trustworthy, City’s attacking players have gradually rediscovered their creative swagger. The aura is back, and with that comes fear – the inverse of the magical quality neutrals can observe inCity’s latest Premier League performances.

Opponents are retreating, tensing up, holding back; they are increasingly mesmerised like they used to be, their own lack of confidence fuelling City’s to create contests that are psychologically uneven from the outset.

Guardiola’s creative players are dancing through teams again, energised by the respect they are being shown. Ilkay Gundogan and Foden lead the way, of course, the former excelling in a new advanced midfield role and the latter coming of age, living up to every wild expectation that has been put upon him over the last four years.

Against Liverpool he started as a lone false nine, then became part of a front two, then moved to the right wing, and was outstanding in each instance – from miraculously understanding the multiple demands of the false nine to out-muscling and out-pacing the Liverpool defenders from the flanks.

Foden is fast becoming the quintessential Guardiola player:intelligent, technically immaculate, and highly adaptable. This latter quality is crucial to the City manager, who continues to make tactical tweaks at a higher rate than any of his contemporaries, and like his players there is a growing confidence – a swagger, even – to the way Guardiola is solving problems in matches.

Against Liverpool, he deployed John Stones and Oleksandr Zinchenko in particularly wide positions as part of a back three, creating a subtle but important change in howCity could progress the ball through the wide areas, where Jurgen Klopp’s narrow 4-3-3 lacked numbers.

At half-time, Guardiola moved Gundogan deeper and Bernardo Silva forwardas a second striker, with instant results. You only have to look back to the previous game for another example.

There is a temptation to point to key players as the reason for City’s upswing; to highlight Ruben Dias’s impact on the defence or laud Gundogan and Foden for stepping up in the absence of Kevin De Bruyne and Sergio Aguero.

But Guardiola has always been a manager of the collective rather than the individual, defined by the wider tactical system. The counters on his tactical whiteboard are generic, interchangeable.

Man City’s success this season, which will surely end in another Premier League title, was not the result of strong individual performances.