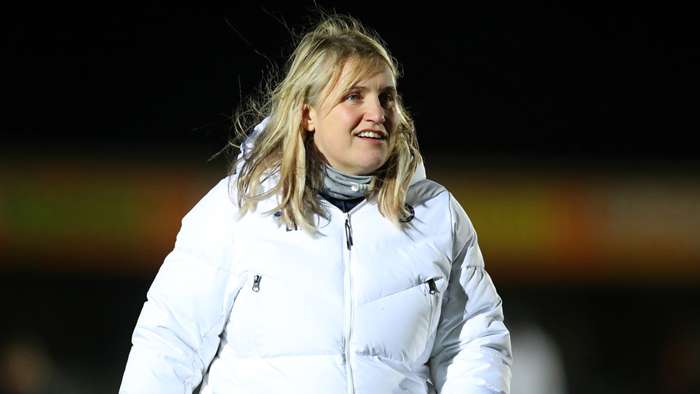 Chelsea manager Emma Hayes believes there needto be more conversations about diversity in football after reports emerged linking her with the job at League One club AFC Wimbledon.

As she faced the media ahead of Chelsea's Continental Cup semi-final against West Ham on Wednesday night, though, Hayes used attention on the speculation as an opportunity to highlight the problem of diversity in football.

"When the football world is ready to adhere to the diversity codes, so that BAME(Black, Asian and minority ethnic) communities, plus women, get the opportunities in football, then I’ll see that as a step forward," she told reporters on Tuesday afternoon.

"This is not a conversation about Emma Hayes and AFC Wimbledon, but we should be having larger conversations around creating opportunities across the diverse spectrum so that opportunities in the men’s game are not limited to those in privileged positions.

"My privilege is what I do for Chelsea and my focus is firmly on what we do tomorrow night against West Ham."

There have been instances of male coaches moving from the women's game to the men's game, former England head coach Phil Neville joining Inter Miami being a particularly recent example, but never of women's coaches doing the same.

Asked whether she believed the suggestion of her stepping down from her role with Chelsea, who were crowned Women's Super League champions last season, to take a job with Wimbledon, who are in the relegation zone in League One, Hayes said: "I just don’t know why anybody would think women’s football is a step down.

"If coaching World Cup champions, winners, players who have represented their countries in the Olympics or Euros is a step down from anything, I think the football world needs to wake up and recognise that women's football - while the game is played by a different gender - is exactly the same sport.

"The qualities involved in having to manage that is exactly the same as it would be for a men’s team. We’re talking about human beings here. But I think unfortunately the football world needs to live by its promises and by the diversity codes and be in a position where they’re promoting the opportunities for the less privileged. That, for me, is what I’d like.

"This is not about Emma Hayes and AFC Wimbledon. This is about the football world being in a position where it’s a normal conversation to talk about having coaches from Asian backgrounds, from Black backgrounds,women,in dressing rooms -not as an exception to the rule but as something that’s normal.

"That process needs to begin and hopefully that affirmative action is something that can be enforced, because there’s so many quality candidates that can do the job across the men’s game. I think we take too much time talking about gender and ethnicity instead of quality of candidates.