'I can't accept it!' - Ribery releases statement after his home is robbed during Fiorentina's clash with Parma 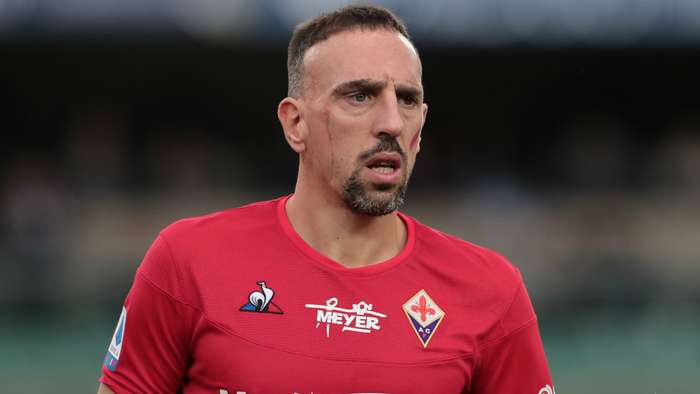 Franck Ribery has released a statement after his home was robbed during Fiorentina's clash with Parma, hinting that he will have to evaluate his future at the club.

Ribery signed for Fiorentina on a free transfer after leaving Bayern last summer, and has since appeared in 15 Serie A matches for the club, scoring three goals.

The former France international was back in Fiorentina's starting XI for their trip to Parma on Sunday, which ended 2-1 in favour of the visitors thanks to two penalties from Erick Pulgar.

While the 37-year-old was handling business on the pitch, thieves allegedly broke into his Florence residence after allegedlytampering with the exterior surveillance system.

They reportedly made off withtwo Rolex watches, a Cartier bracelet, various gold jewellery and 10 branded bags, after vandalising the furnitureand leaving clothes strewn all over the house.

Ribery's family were staying in Munich at the time of the incident, but the Fiorentina winger recorded a video showing the damage caused upon his return,which he has posted on social media.

The former Bayern star has also sent a message to supporters via his official Twitter account promising to put his family's safety first after the incident, which reads: "After this victory against Parma, I came back home. This "home" in Italy, a country in which I decided to pursue my career after so many beautiful years in Munich.

"This is what I discovered ... So yes, my wife lost a few bags, some jewellery, but "al Hamdoulillah" it's not essential. What shocks me is the feeling of being naked.

"To have your pants taken down and that feeling, it doesn't pass. I can't accept it! Thank God my wife and my children were safe in Munich, but how can we trust our surroundings anymore today?

"How can I / we feel good here today after that? I don't run after the millions (of euros). Thank God we lack for nothing. But, I always run after the ball, because it's my passion.

"But passion or not, my family comes first. And we will take the necessary decisions."

Ribery is due back in action with Fiorentina on Wednesday, with Cagliari set to arrive atArtemio Franchi Stadium for a mid-table encounter.