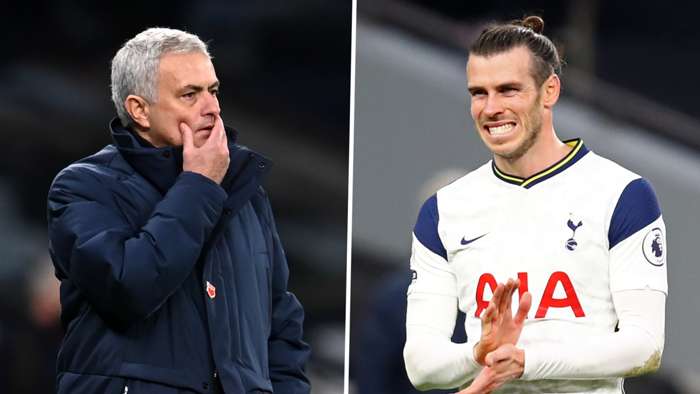 Jose Mourinho has refused to answer a question on whether Gareth Bale has been a disappointment at Tottenham, followingdefeat against Brighton on Sunday.

The Welshman scored 60 goals in 218 games for Spurs, almost single-handedly firing them towards Champions League qualification in the process, before going onto reach an even higher level at Santiago Bernabeu.

He picked up four Champions League crowns and two La Liga titles with Madridand was a key member of their front-three alongside Cristiano Ronaldo and Karim Benzema at one stage, but he fell out of favour in 2019-20.

Zinedine Zidane sanctioned Bale's departure ahead of the Blancos' latest campaign, with the winger retracing his steps to re-join Tottenham on a season-long loan.

The 31-year-old has been unable to rediscover his best form in familiar surroundings, scoring just four goals in 15 appearances across all competitions.

He was handed only his second Premier League start away at Brighton over the weekend, and once again failed to deliver the goods in the final third as Mourinho's side fell to a 1-0 defeat.

Bale was substituted just after the 60-minute mark having been unable to affect the game in any meaningful way, with it now being suggested that he is definitely not the right man to fill in for Harry Kane while he recovers from a doubleankle injury.

However, Mourinho refused to be drawn on the Wales international's recent struggles post-match while insisting Spurs' latest setback could not be blamed on just one player.

"If that question comes in a great moment for the team, and after a victory, and when Gareth like the team plays a good game, it’s easier for me to answer to you. I don’t want to do that. We lost, and we all lost."