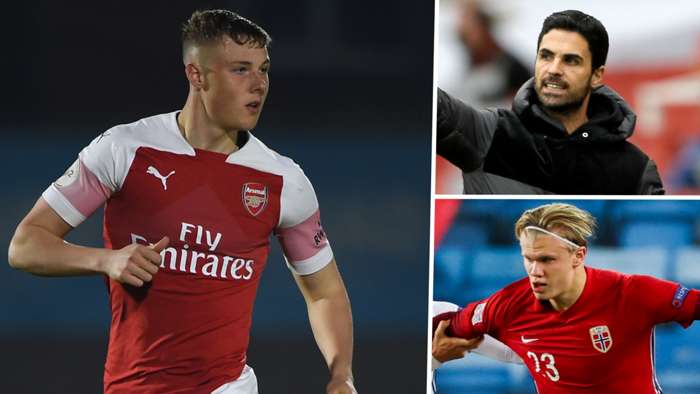 When Daniel Ballard made his international debut for Northern Ireland against Romania in September, there was only one man who was going to get his shirt.

A lot has happened since Stapleton first cast eyes on Ballard while he was playing for his local side in Stevenage, and there have been times when the defender thought he was not going to make it.

So after making his international debut he wanted to ensure Stapleton knew how much he appreciated the part he had played in a young career that now only appears to be heading in one direction.

“Brian’s been there since the start and has always helped me and my family with everything,” Ballard told Goal during an exclusive interview.

“He’s someone I knew I could always turn to and he’d be there for me. He’s just a really genuine and good-hearted person.”

The road Ballard has taken to get to the international stage has not been an easy one.

Currently on loan at Blackpool in League One, the 21-year-old centre-back has his eyes fixed on returning to Arsenal and making his mark on the senior side in the coming years.

Should that happen, it would cap a remarkable story for a player who was twice told he was being released by the Gunners, only for him to battle back on both occasions and continue his journey with the north London outfit.

Ballard joined Arsenal in 2004 after Stapleton spotted him playing for Fairlands Youth.

“He actually went to watch a different tournament, but he didn’t find anyone so a load of parents ushered him over to where we were playing,” Ballard recalled.

“I thought I had a terrible game. I got in the car and started crying my eyes out, but then my dad told me I was going for trials with Arsenal - I just thought he was trying to cheer me up.”

Initially, his progress through the academy was relatively smooth, but things started to become much more difficult as he entered his teenage years.

“Technically and physically, I felt like I was getting left behind,” he admitted. “I always felt I was falling behind the standard.”

It was at that point Ballard suffered his first major setback as a footballer, with Liam Brady - who was then in charge of Arsenal’s academy - telling him his time was up.

“Liam took me in a meeting at U14s and told me he was giving me my release papers,” said Ballard. “I just burst out crying, it was like my whole world had come to an end.”

But Ballard’s mood soon changed as he and Brady continued to chat about football.

“We spoke for a while and after about half an hour he just changed his mind and never gave me the release papers,” said the defender.

“He said I could stay and that there was new management coming in. He said take two years and try and impress them.”

That new management team was led by Andries Jonker, who was appointed academy manager in 2014.

Ballard stayed for thosetwo years, but missed out on a scholarship and it looked once again like his time with the Gunners was over.

He had a trial at Southampton and had four or five others lined up when a broken ankle threatened to put a halt to his attempts of ever making it in the professional game.

Ballard even had to sign up to do his A-Levels at school because he was heading into a new season without a club, only for a remarkable turn of events to lead him back to Arsenal.

“I was halfway through a trial with Stevenage when I got a call from Jonker saying he needed a player to go with Arsenal to play Bayern Munich in a friendly,” said Ballard.

“A lot of people were telling me not to go because Stevenage had offered me a scholarship. But my heart was set. As soon as Arsenal said that, there was no way I wasn’t going to go.

“So I went and I played 45 minutes against Bayern. I had a really good game and on the plane journey home Andres offered me a two-year scholar's contract. It was a pretty mental five or six months.”

Ballard added: “As soon as I went back, although it was still really tough, everything seemed to go my way for once.

“My body started to develop and I started to grow taller. I was still behind the curve, but I was starting to catch up.

“And looking back on it now I think being behind the curve all the time was actually an advantage because I had to work a lot harder. If I hadn’t shown that hard work, I don’t think the coaches would have helped me out as much.”

Ballard signed his first professional contract with Arsenal in 2018 and penned an extension less than a year later.

He joined Swindon Town on loan in June 2019, only to suffer a serious knee injury that would see him return to Arsenal after just three appearances.

The injury sidelined him for over six months, but Ballard returned to fitness not long after the arrival of Mikel Arteta, with the Spaniard often calling him up to train with the senior squad at London Colney.

Ballard agreed to join Blackpool on loan for the first half of the 2020-21 season and has provento be a big hit with the Seasiders, despite suffering from a hamstring injury which has limited him to just eight appearances in all competitions.

That loan has now been extended until the end of the season, with the centre-back enjoying the hustle and bustle that comes with playing in League One.

“I think it’s important that you really experience what it’s like away from Arsenal,” he said. “I feel like a Blackpool player which I think it’s really important.

“It’s been really tough and the amount of games is hard to deal with. There are no easy games. You could be playing bottom of the league, but the quality isn’t any different from playing mid-table or even top of the league because you have to be a very good, well rounded professional to play at this level.

“There are no weak spots a lot of the time and everyone works their b*llocks off. It’s pretty relentless.”

Ballard’s form with Blackpool this season has seen him rewarded with five caps for Northern Ireland, with wo of those games coming against Norway, and a certain Erling Haaland.

The Borussia Dortmund striker came out on top in the game at Windsor Park, scoring twice in a 5-1 win, but he could notget the better of Ballard in the return fixture a week later, with a Stuart Dallas own goal all that separated the sides.

“Haaland was pretty tough,” said the Arsenal centre-back. “He’s like 6’4, but he’s fast which is not a combination you usually see. So it’s pretty intimidating coming up against him.

“He’s got that aggression, that hunger. He won’t let you have an easy game and it’s nice playing against players like that because they give you the best challenges and it gives you the motivation to go away and prove yourself

“Obviously the first game he scored two goals, but I think in the away leg we did really well to stop him from doing anything really.”

Those international appearances have given Ballard the taste for more. While he may have felt he was lagging behind for much of the early part of his Arsenal career, now he believes he has what it takes to succeed in north London.

He accepts he might have to spend another season out on loan once his time with Blackpool comes to anend, but his long-term ambition is clear.

“I would love to represent Arsenal,” he said. “It’s always the goal.