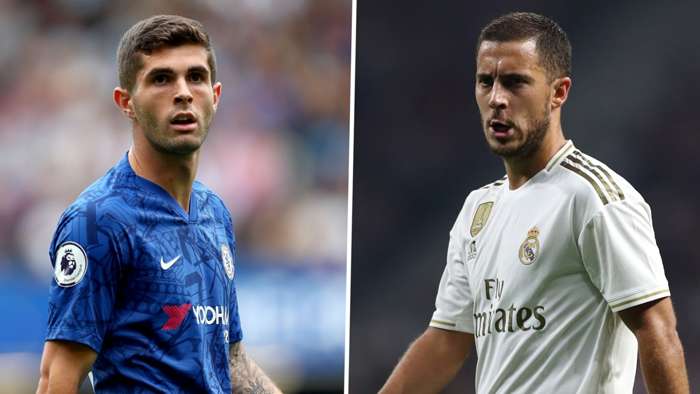 Christian Pulisic is not interested in emulating Eden Hazard's heroics with Chelsea, with the United States international looking to make a name in his own right at Stamford Bridge.

Pulisic, 21, joined up with the Blues last summer after completing a transfer worth£58million ($72m)the previous January from Borussia Dortmund.

He made a positive start to life in the Premier League before injury interrupted his adaptation, missing more than two months of action prior to the top flight shutting down due to the coronavirus pandemic.

Two goals in his first two matches back after the break, though, proved that the youngster had regained fighting fitness, and he has established himself as a key part of Frank Lampard's attack - although he is reluctant to compare his role with that of the current Real Madrid star.

"Eden was an incredible player for Chelsea and he is word class. I'm not trying to compare to him, I'm just trying to be my own player," he explained to Sky Sports following Chelsea's 3-0 defeat of Watford on Saturday, a result that keeps the club in fourth place in the Premier League standings while atoning for a shock loss in midweek at the hands of West Ham.

"We needed that one today. We came out with a lot of energy and we needed a huge result, especially after dropping points in the last game.

"There was a bit of extra energy because of that loss and we wanted to prove a point.

"The top four isgoing to be close and come down to the end. We are excited and confident we can do it."

Having gone ahead via Olivier Giroud's strike, Chelsea had Pulisic to thank in part for their second of the evening as he drew a foul fromEtienne Capoue to win his side a penalty.

Willian duly dispatched the kick and Ross Barkley rounded off an emphatic victory in the final minutes, leaving the former Dortmund star delighted with his contribution.

"I got fouled for the second one as well and I thought it might be overturned but it is what it is," he added.

"I feel confident in my game right now and I feel like I can help the team."