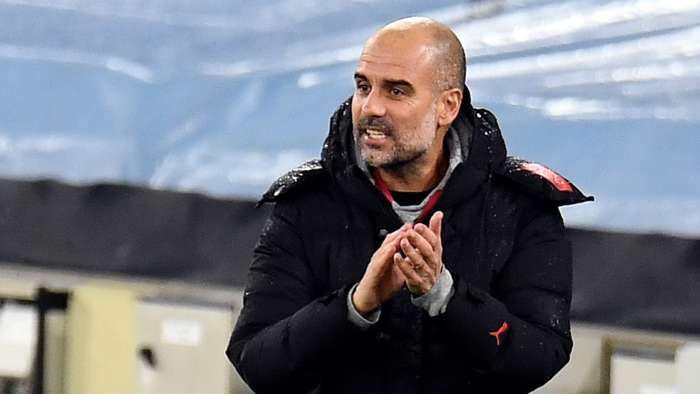 Manchester City manager Pep Guardiola says he is considering a longer career as he approachesthe age of 50 with a number of goals still to reach.

The Spaniard has deliveredtwo Premier League titles, the FA Cup and three League Cups during his time at City, who are on course for more silverware this season.

The Blues are through to the Champions League knockout stages and Carabao Cup semi-finals once again, while they currently occupy eighth-place in the top-flight, with two games in hand still to take in on leaders Liverpool.

If they win both those fixtures, starting with a clash against Chelsea on Sunday, the Manchester outfit will only be one point behind the reigning champions, with Guardiola still going strong in the Etihad hot seat after signing a two-year contract extension in November.

The former Barca boss, who won three La Liga titles at Camp Nou before winning the same number of Bundesliga crowns at Bayern Munich, has previously stated that he might retire early to pursue other interests away from football.

However, Guardiola has now revealed that he's had a change of heart, having learned how to better cope with the demands of management at the highest level since moving to Manchester.

“Of course I am better now, definitely. Experience helps you - especially the way I live my profession,” the 49-year-old told City's official website.

“Before I thought I would retire soon, now maybe I am thinking I might retire older. 50 already, it is a nice age!”

Asked to discuss the possibility of lifting the Premier League trophy for the third time come May, Guardiola responded:"If you think about what can happen in January, February - the two games in hand, we can lose these two games and anything can happen.

"So, in the Premier League, every game is so tough and it is better to be calm. The real Premier League, the people I spoke to before I landed here, said everyone can lose to everyone. I didn't see this until now.

"Now is the first time when I see in the Premier League, one team is able to lose or win seven, and after draw, and after lose. The results are unpredictable."