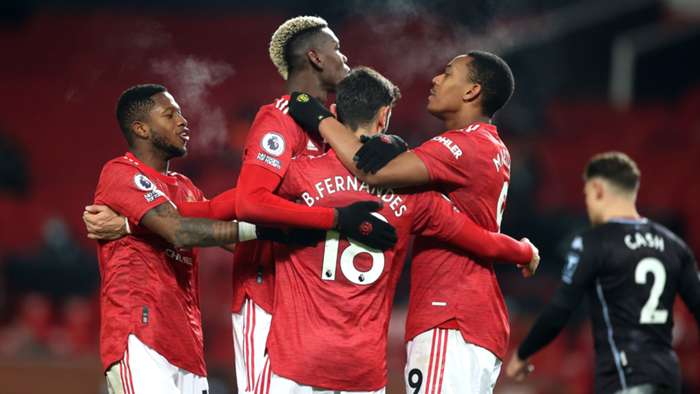 Bruno Fernandes' start to his Premier League career is second to only Andy Cole, as the Manchester United playmaker snared the winning goal against Aston Villa.

Fernandes converted the spot kick after Paul Pogba was deemed to be fouled in the penalty area by Douglas Luiz, with the VAR examining referee Michael Oliver's decision before giving it the all clear.

Despite nine of his league goals coming from the penalty spot, Fernandes is adamant that all goals count for the same and explained the confidence he has from 12yards.

"I feel like I have to make the penalty go on goal but it's important to score and it doesn't matter how," Fernandes told BBC Sport.

"You need to win the games no matter how. I am confident when I take the penalty otherwise I would pass for somebody else."

In what was a free-flowing contest, the Red Devils took the lead five minutes before half-time when Martial headed in Aaron Wan-Bissaka's cross after Tyrone Mings missed an opportunity to clear.

Villa continued to push forward in their bid for an equaliser and they were rewarded on 58 minuteswhen Jack Grealish's rolled through the back post where Traore was able to clinically finish.

But three minutes later, Man Utd had their nose back in front when Pogba went down under pressure from Luiz and Fernandes struck truly from the spot.

With Ole Gunnar Solskjaer's team now only behind leaders Liverpool on goal difference, Fernandes refused to talk about their title chances but insisted the improvement under the Norwegian was there for all to see.

"I agree with saying we have improvedbecause against Leicester we conceded a goal at the end," Fernandes said.

"The only mistake we made today was we had more chances to score again and maybe we have to close the game more quickly. We don't score the third one and they press us until the end.

"Of course it's great to be level with Liverpool but it's far away the end of the Premier League so we have to keep going, train hard and try to keep winning.