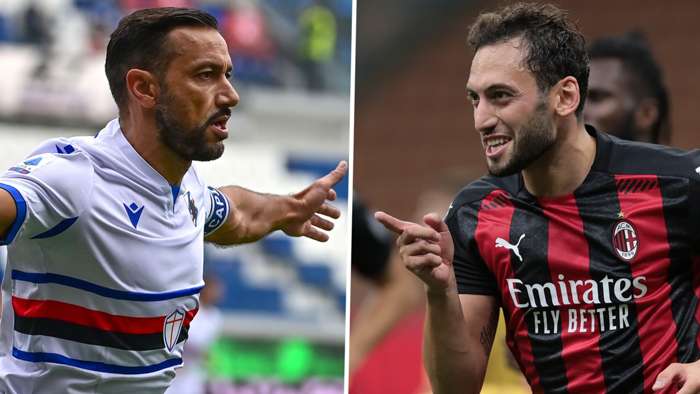 Juventus’ hunt for another striker is leading them towards Sampdoria veteran Fabio Quagliarella, Goal has learned, with Hakan Calhanoglu off the table for the Bianconeri as he is set to remain at AC Milan.

Various options have been mooted for Andrea Pirlo to consider, while a number of others have been ruled out.

Diego Costa, fresh from his release at Atletico Madrid, will not be targeted by Juve despite dropping into the free agent pool and boasting the experience they are after.

Graziano Pelle is another frontman without a club who has seen a switch to Turin mooted, but he is being touted elsewhere.

That has led Pirlo and Co towards Quagliarella, who is still going strong at 37 years of age.

He has represented the Bianconeri in the past, recording 30 goals through 102 appearances between 2010 and 2014.

Pirlo played alongside a fellow Italy international during that spell and still boasts a strong relationship with a familiar face.

It could be that he is drafted into rotation plans at the Allianz Stadium, with Juve eager to land another forward as they continue to compete across multiple fronts.

It had been suggested at one stage that a raid on a different domestic rival would be launched for another proven performer in the final third.

Calhanoglu has been generating plenty of speculation as his contract at San Siro continues to run down.

No fresh terms have been agreed as yet, despite a desire on Milan’s part to get the Turkish playmaker tied to a new deal.

Various landing spots have been offered up for Calhanoglu, with a player of his ability unsurprisingly attracting interest from across Europe.

Juve would have been in the hunt were an exit door to be swung open, but it is understood that the Rossoneri will not be considering parting with a prized asset in January.

Calhanoglu is open to the idea of thrashing out a new agreement with Milan, having been on their books since 2017 and helping to inspire a title challenge this season, and patience will be shown.