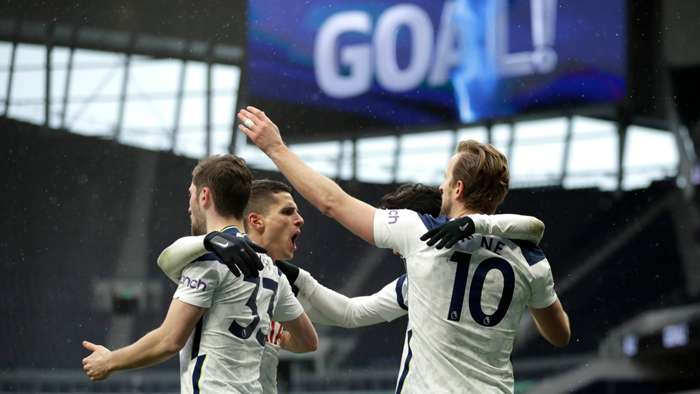 Harry Kane has moved up to second in Tottenham’s all-time goalscoring charts afterthe England striker made a surprise early return from injury in Sunday’s 2-0 win against West Brom.

Son Heung-Min doubled Tottenham’s advantage four minutes later, with the three points enough to lift the north London club up to seventh in the Premier League.

Kane has missed Tottenham’s last two matches because of an ankle problem and was expected to be absent for the clash with the Baggies at Tottenham Hotspur Stadium.

However, the 27-year-old was deemed fit enough to start the game as Jose Mourinho’s side looked to end a run of three successive defeats.

Kane’s openermeans he has now scored 208 goals in 317 appearances in all competitions for Tottenham, making him the joint-second highest scorer in the club’s history alongside Bobby Smith, who had exactly the same record.

It means the England captain is now 58 strikes short of Tottenham’s all-time record scorer Jimmy Greaves, who hit 266 goals in 379 appearances between 1961 and 1970.

Kane’s strike also continued his fine record against newly-promoted sides. The 27-year-old has now scored in 13 of his last 15 Premier League appearances against such opposition,including each of the last six.

He is the first player to manage that feat since Liverpool’s Mohamed Salah between January and December 2018.

It is not just Kane who is enjoying a fine goalscoring season for Tottenham.

Son Heung-Min’s decisive second goal took him level with the England striker on 13 Premier League goals. Only in 2016-17 has the South Korean scored more goals in a single campaign, when he scored 14.

Teenager Dane Scarlett wrote his name in the history books when he came on as a late substitute.

The forward replaced Son in stoppage-time and in doing so became the youngest player to make an appearance for Tottenham in the Premier League at the age of 16 years and 230 days, eclipsing the record set by Stephen Carr back in 1993.

What is the meaning behind Son Heung-min camera celebration?