Koeman calls on Barcelona to bring in new striker 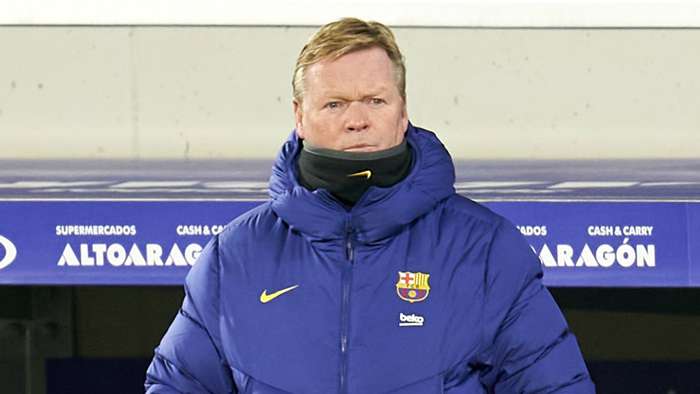 Ronald Koeman said Barcelona were missing a target forwardas they scored just once from 20 shots on goal in a 1-0 victory over Huesca, and called for the club to sign a new striker.

The trio attempted 15 shots between them but it was Frenkie de Jong who scored the decisive goal, volleying Messi's chipped pass into the net after 27 minutes.

Koeman, who sent on Antoine Griezmann for Braithwaite nine minutes from time, admitted that he lacks a natural striker to lead the line in between the creative talents of Messi and Dembele.

"I trust each player in our squad," Koeman told reporters. "But if we choose to have three midfielders there is room for three forwards.

"With Leo we bet on someone with great depth like Dembele, and we have to choose between Martin or Antoine at the top and Martin has done it.

"It's a nine that we're missing in these games but it doesn't mean anything in regards to Antoine's substitution. We have a lot of games and we need all the players.

"We have said several times, at the beginning of the season, that we need someone at the top to have more competition and more goals, more effectiveness, but this depends on many things."

Koeman indicated that he believes improving his striking options will help reduce the pressure on Barcelona's defence, which absorbed waves of Huesca attacks as the hosts sought an equaliser late on at El Alcoraz.

Barcelona were on target with just seven of their 20 shots at goal and Koeman said they must close games out earlier to avoid nervous late spells.

"The second half was not so brilliant," admitted Koeman.

"In the end we suffer a little because they have tried to create and there have been crosses where we have defended well. If you don't close outthe game earlier, you always suffer."

Looking ahead to La Liga clashes with Athletic Bilbao and Granada, and a Supercopa de Espana semi-final against Real Sociedad, Koeman added: "This month is very important for our aspirations because we have many away games and if we win them I think we can fight.