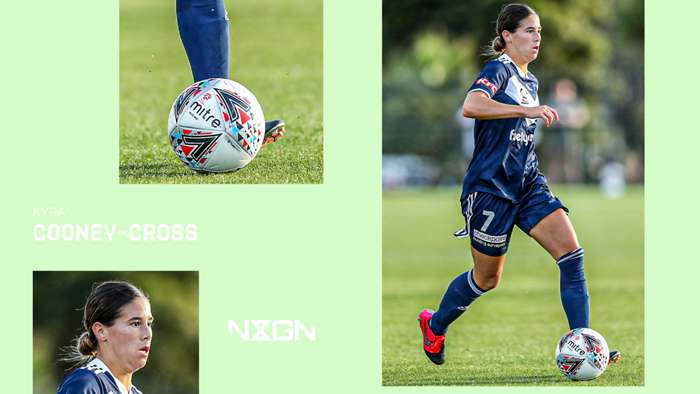 As the new W-League season gets underway in Australia, it feels like a new chapter for a league that has,from Sam Kerr to Caitlin Foord, long boasted the talents of Australia's biggest stars.

But for all the concern that surrounded Australia’s top-flight for large parts of 2020, the new yearprovides a real chance for the country’s young talent to shine as they aim to emulate the names that have since moved on to pastures new.

At the forefront of that exciting next generation is Kyra Cooney-Cross.

Part of the Melbourne Victory team crowned W-League Premiers in 2018-19, Cooney-Cross moved to Western Sydney Wanderers last year for a chance to be a regular starter.

What followed was a campaign that showed exactly what all the hype is about. With four goals and three assists from 13 games, she returns to the Victory this season poised for a true breakthrough year.

A goal-scoring phenomenon at youth level for Australia, Cooney-Cross went to the 2019 Women’s World Cup with the senior team as a training player.

With that valuable opportunity sitting on her CV alongside three W-League seasons and three campaigns acrossthe National Premier League competitions in Victoria and New South Wales,the 18-year-old has experience that belies her age.

“She's got very good physical qualities in terms of her explosive speed and she's really in tune to those qualities, doing everything she can to make sure that helps keep her at the top of her game,” Blayney says.

“She's technically developed with both feet, which is important in the modern game, and that's becoming an asset for her. She can strike a ball off her left or right foot at any given moment.”

Evident in Cooney-Cross’ game last season was the ability to use that explosive speed to get into the box and contribute in front of goal.

Meanwhile, her superb delivery from a set pieces, creative flair and brilliant dribbling ability -a stand-out quality from a very young age -helped her rack up the assists.

“I think there's a level of maturity there where she understands now if you want to play more, you have got to be the best on the pitch,” Blayney, who first met Cooney-Cross while working as an assistant with the Matildas’ U17s, says.

“That's developed in Kyra and that's why I look forward to seeing her this W-League season, where she's hungry, but she's also got a few more runs on the board to back that up.”

Those at Melbourne Victory have already seen glimpses of what Cooney-Cross can do, with her having scored two goals for them back in the 2017-18 seasonwhile still just 15 years old.

She returns with the potential to be a key player as the club strive for a third successive appearance in the W-League finals.

At 18, that pressure might be too much for some, but Cooney-Cross is the type to thrive under it.

“She's always committed to putting herself in challenging environments, which I think has helped propel her along her journey,” Blayney adds.

“That commitment that she's always been willing to sacrifice and put herself in uncomfortable arenas to be better is something that's pretty important about Kyra.”

With that attitude, the heights that Australian women’s football is now hitting will no doubt excite the teenager as well.

As Kerr develops into one of the best players in the world,as Foord showcases her talents in the Women’s Super League with Arsenal, as 20-year-old Ellie Carpenter shines week in, week out for the reigning European champions, Lyon, the ceiling for Australia’s talent continues to rise.

“We like to think that the ceiling is that you'll be the world's best. That's where we're moving towards and we know we're capable of it,” Blayney says.