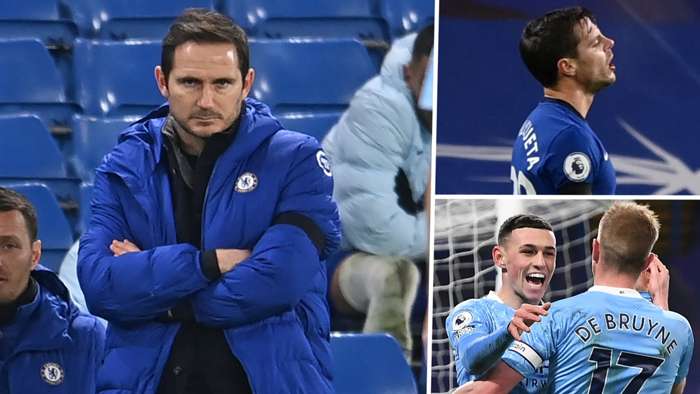 At the start of December, Chelsea were considered realistic Premier League title contenders after an impressive start to the season.

Unsurprisingly, pressure is beginning to mount on manager Frank Lampard, and rightly so given recent results.

The nadir came here at Stamford Bridge, as Manchester City dominated Chelsea on their way to a 3-1 win that could easily have ended with the visitors scoring far more.

City arrived in west London without six players due to positive Covid-19 diagnoses, but you would barely have known as they out-ran, out-thought and utterly outplayed their hosts.

Instead, they regularly found themselves pinned back by a City team who started without a recognised striker, as the midfield runs of Kevin De Bruyne, Phil Foden, Raheem Sterling, Bernardo Silva and Ilkay Gundogan causedcountless problems.

Full-backs Cesar Azpilicueta and Ben Chilwell both lost their own individual battles while centre-back duo Kurt Zouma and Thiago Silva, who have been rock solid throughout the majority of the campaign, were seen arguing with one another after an early missed opportunity by De Bruyne.

At the other end,Timo Werner was preferred to Tammy Abraham and Olivier Giroud as a central striker, but the Germany international was largely anonymous as his drought in front of goal stretched to 12 games for club and country.

Either side of him Christian Pulisic and the returning Hakim Ziyech struggled to create anything of note, particularly during a chastening first-half that saw the Blues go 3-0 down after goals from Gundogan, Foden and De Bruyne.

It marked just the second occasion that Chelsea have found themselves three goals down in the first half of a Premier League home game, and the first time since the opening day of the 2017-18 season.

That campaign ended with Antonio Conte's departure, and Lampard now needs a drastic turnaround in form if he is to avoid being let go before his own contract is up in the summer of 2022.

After a summer spending spree of £220 million ($275m), the failings of last season were supposed to disappear, but despite some encouraging early signs it is difficult to see exactly how and where the Blues have improved, particularly when they face teams who are as strong as City.

There have already been rumours in Germany that former Paris Saint-Germain manager Thomas Tuchel is being considered as a potential replacement for Lampard if things do not improve, and more names will likely be mentioned over the course of the next week or so.

Despite that, no signs of Lampard being in any imminent dangerhave been suggested toGoal, thoughRoman Abramovich does operatein the dark.

History alsotells us that even Chelsea's best coaches struggle to make it into their third season.

Thatrecent history also informs us that qualifying for the Champions League is seen as the bare minimum at Chelsea, and Lampard's achievement of doing so last year was seen as a success amid a transfer ban.

However, the Blues were looking for progress once thatwas lifted, with a host of exciting players arriving during pre-season.

They find themselves on 26 points after 17 matches, which is three fewer than they had accrued at this stage of last season.

That should be concerning for Lampard and the club's hierarchy, given the Blues have never finished higher than sixth when amassing 26 points or fewer after this many games.

Winter has been bleak for Lampard, and though they are far from out of the race for a top-four finish, a lot more was expected given the summer expenditure and the talent that was already in Lampard's squad.

If he cannot turn this run of form around quickly, then even a club legend is not immune from being added to the scrapheap of former Chelsea coaches.