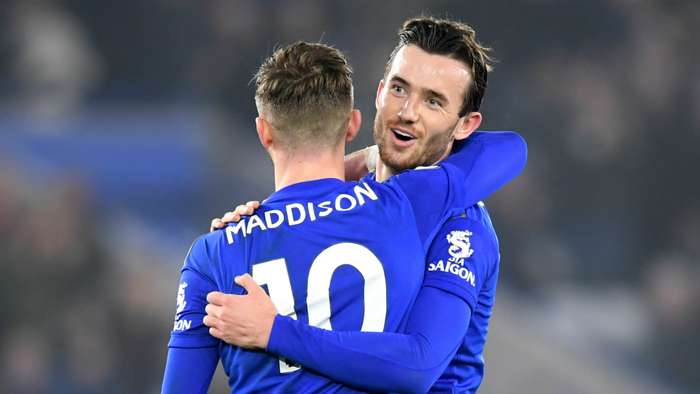 James Maddison and Ben Chilwell are "big doubts" for Leicester City when they travel to play Arsenal on Tuesday, says manager Brendan Rodgers.

Leicester won the reverse fixture 2-0 in November, with Maddison scoring and Chilwell playing the full game.

But the two England internationals are unlikely to be fit this time around, with the Foxes embroiled in a competitive battle to finish in the Premier League's top four.

Maddison injured his hip ahead of last week's defeat at Everton and had to miss Saturday's 3-0 home win over Crystal Palace, a game in which Chilwell had to be withdrawn at half-time.

"We've got doubts over James Maddison and Ben Chilwell," Rodgers told a press conference ahead of his side's trip to Emirates Stadium.

"They are the two that could struggle but we'll see how they are on Monday.We just have to wait and see. There are big doubts over both.

"Ben's is his plantar fascia, the bottom of his foot, which is giving him pain. We'll just have to assess that and see what the specialists say on it.

"You can play through it but of course there are times you get a real bad pain in it, so it's just trying to manage that.

"They willboth be big doubts ahead ofthe game but we'll give them every chance."

The win over Palace was crucial for third-placed Leicester, who had failed to win their first four matches since the top-flight's resumption.

Kelechi Iheanacho opened the scoring for the Foxesat the King Power Stadium, before Jamie Vardy hit a brace to join the top-flight's 100-goal club.

"It was important, but it always has to be about performance," added Rodgers.

"We've been down on our luck lately and I felt the win was coming.We knew we had to improve, but the confidence it gives you is huge."

Chelsea have moved to within two points of Leicester while a resurgent Manchester United are three behind with five matches to go in the race to secure Champions League football.