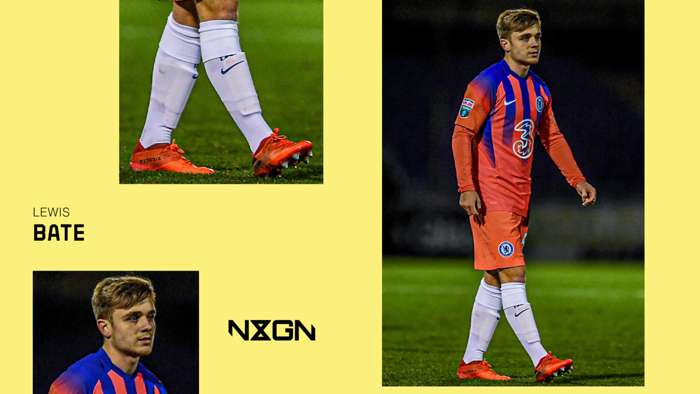 "Too small to make it at the professional level."

Standing at just 5'6" (1.68 metres), Lewis Bate could have been forgiven for believing that the same tap on the shoulder could have been headed his way at some stage as he made his way through the various age-group sides at Chelsea.

But what the midfielder lacks in physicality he more than makes up with his prodigious talent on the ball, while he has learned to use his small frame to his advantage when battling with opposition players.

Now, just over two months on from celebrating his 18th birthday, Bate is closing in on a first-team debut, with Sunday's FA Cup third-round clash against Morecambe potentially providing him with an opportunity to show Frank Lampard what he is capable of.

Doing so would mark a huge step on Bate's journey at Chelsea, which began as an eight-year-oldafter he caught the eye while playing for Footscray Lions in Sidcup, an area of south-east London.

"He was too young to play initially and played a year up. He was a really good player," Chris Spearing, Bate's coach at Footscray, tellsGoal."He always had a smile on his face, he was quite a bit smaller than the other guys, had a sweet left foot but he was like a whippet, he was really rapid.

"He comes from a happy family but on the pitch he could be a terrier in winning the ball back despite being one of the smallest.

"Chelsea scouted him over a number of games, but particularly against Parkwood FC where we actually got beaten. The scout came over to us and saw how good he is with his feet and how he followed instructions, which can be rare with young children."

Bate has always stood out as having the talent required to make the grade, but he truly came to prominence in 2017-18 when captaining Chelsea's U15s to treble-winning glory.

It was during that campaign that he caught the eye of Jody Morris, who at the time was an academy coach at the club and has gone onto become Lampard's assistant with the first-team.

A diminutive but tenacious midfielder during his own playing career, Morris oversaw Bate's immediate ascension up the ranks, with the youngster going on to make his U18s debut as a15-year-old.

Just over a year later, and with Morris back at the club having moved to Derby County to work alongsideLampard during his year coaching in the Championship, Bate was called-up to train with the first-team ahead of the 2019-20 season.

Though he is yet to make his senior bow, he was named among the substitutes against both Sheffield United and Bayern Munich towards the end of last season as Lampard increased the size of his squad amid the threat of Covid-19.

A standout performer for the club's U23s, Bate has been back among the first-team ahead of the clash with Morecambe, with the likes of Tino Anjorin, Tino Livramento, Henry Lawrence and Jude Soonsup-Bell all also hoping for a run-out against lower-league opposition.

Should Bate take the field at Stamford Bridge, he will likely have to impress if he is to be given anymore chances before the season is out given the huge number of midfield options available to Lampard.

Mason Mount and Billy Gilmour have both broken into Lampard's squad over the past 18 months, and Bate now faces a fight to prove he can join them.

Last season's Academy Scholar of the Year, Bate's current contract in west London will be up at the end of the 2021-22 campaign, and though Chelsea are reluctant to lose the England youth international, there is an understanding that at his age he needs to be integrated into the first-team picture sooner rather than later.

League One sideAFC Wimbledon failed in a bid to sign him on a season-long loan over the summer whileGoalcan confirm that a number of clubs have enquired about signing Bate on a permanent deal in recent months.

Given his pressing ability and superb reputation from set-pieces it is understandable, with some having compared his game to that of Jack Wilshere when he was breaking through at Arsenal just over a decade ago.

A close friend of Bayern Munich starlet Jamal Musiala,Batehas seen just how quickly things can progressfor a player if they were to leave Chelsea for pastures new as he waits for his own breakthrough.