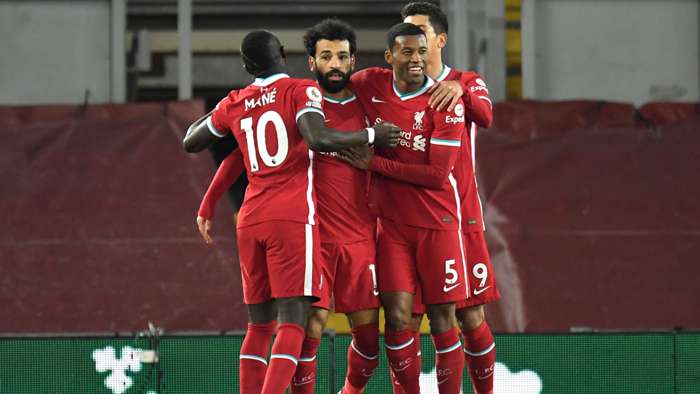 Mark Lawrenson is offering “dry” responses to anyone daring to doubt Liverpool in 2020-21, with the Reds legend eager to point out that Jurgen Klopp’s side are “top of the league with half their team missing”.

Despite having to get creative at times, Klopp has guided his defending champions back to the Premier League summit.

The Merseyside outfit have not been as dominant as they were in 2019-20, but they remain the team to catch in the title race.

With that in mind, Lawrenson remains baffled by those who are quick to ask questions of the Reds, with remarkable standards being maintained by a squad that has conquered domestic, continental and global competitions.

“If they were not creating chances then it would be a serious worry, but they are still making loads of them,” Lawrenson told BBC Sport after seeing Liverpool drop points against West Brom and Newcastle over the festive period.

“If they had nicked a goal at Newcastle on Wednesday, which obviously they could and should have done, then they would have won, gone five points clear and everyone would be saying 'who is going to stop Liverpool now?'

“Instead, it is a case of 'well, they are only three points clear'. It's a fine line, that changes people's perceptions of how a team is doing when it really shouldn't do. I've spoken to Liverpool fans who tell me 'oh, we're not doing well at the moment, and we can't put away our chances'.

“My response is usually quite dry and along the lines of 'no, they are only top of the league and with half their team missing - and that front three have been terrible for the past three years, haven't they?'

“Being serious though, teams don't win the league by 15 points every year. This is what usually happens with the ebb and flow over the course of a season when you are challenging for the title - and you have to remember Liverpool are not being beaten either. The reaction when they do drop points just shows you the standards they have set.”