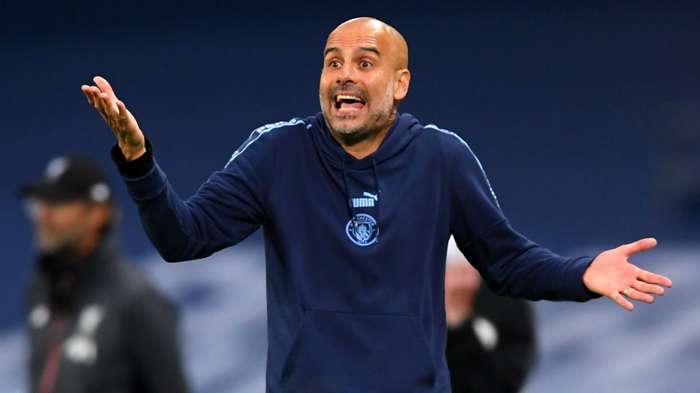 Pep Guardiola insisted that "Liverpool arrived with no beers in their blood" after Manchester City's victory over the Premier League champions at Etihad Stadium.

City put the Reds to the sword in Thursday night's top of the table clash, running out 4-0 winners thanks to effortsfrom Kevin De Bruyne, Raheem Sterling, Phil Foden and an Alex Oxlade-Chamberlain own goal.

Liverpool started the game well, with Mohamed Salah coming closest to opening the scoring when he struck the post, but the momentum of the match quickly changed after City were awarded a penalty.

Joe Gomez left the referee with no choice but to point to the spot after bringingdown Sterling in the box, and De Bruyne stepped up to cooly slot the ball past Reds number one Alisson from 12 yards.

Sterling doubled the home side's lead when he finished off a quick break, before Foden's superb individual effort put City 3-0 up right on half-time.

The England international beat Allison again in the 66th minute, but Chamberlain was credited with the goal after seeing his attempted clearance find its way into the back of the net.

City were good value for their comprehensive victory in the end, while Liverpool seemed to suffer a hangover of sorts after a week of celebrations on Merseyside.

Jurgen Klopp's men were officially crowned Premier League winners following Chelsea's win over City last Thursday, but Guardiola does not believe that his side came up against a below-par Reds outfit atthe Etihad.

"My team I like every single game. We tried to play football, take risks. The best team I have ever faced in my life at high pressing.

"We had the courage to play in the small spaces.

"It is important. I saw the guard of honour, how they work inside, how focused they were. They didn't even say thank you because they were focused.

"They drank a lot of beers this week but they arrived here with no beers in their blood which is why I give us a lot of credit."