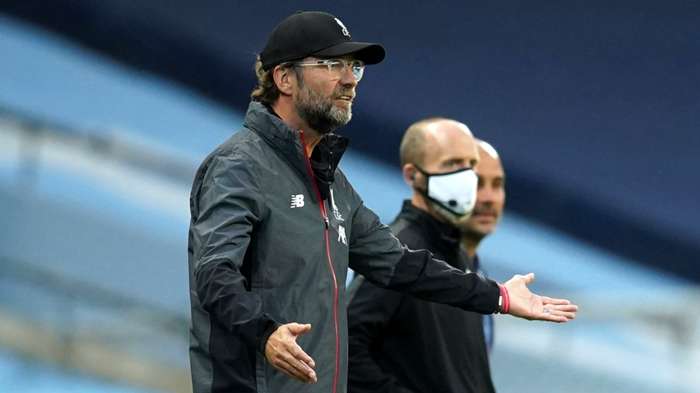 Liverpool have failed to score in five consecutive away fixtures for the first time in 28 years after being humbled by Manchester City.

The Reds secured the Premier League title after City's 2-1 loss at Chelsea last week, becoming the first club to secure the trophy with seven matches to spare.

Jurgen Klopp's men are also on course to break the record points haul of 100, which was set by City in 2018-19, but they took their eye off the ball at Etihad Stadium on Thursday.

After being welcomed onto the pitch bya guard of honour from the home side, Liverpool started the brighter in a top of the table clash devoid of any atmosphere due to the continued absence of supporters amid the coronavirus pandemic.

However, it was Pep Guardiola's Blues who ended up taking the lead, with Kevin De Bruyne coolly converted a penalty after Raheem Sterling was fouled in the box.

Sterling grabbed his 13th goal of the season to put City 2-0 up with 35 minutes on the clock, as he finished off a flowing counter-attack after showing great composure in the box.

An Alex Oxlade-Chamberlain own goal compounded the Reds misery inthe second period, as City reduced the gap at the top of the Premier League to 20 points with five games left to play.

Liverpool have now gone five consecutive away gameswithout scoring in all competitions for the first time since April 1992, when they endured an eight-match runon the road without a goal.

Their seconddefeat was also the joint heaviest by a side already crowned champions in Premier League history, with Liverpool having also beaten Arsenal by a 4-0 scoreline the game after their coronation in 1997-98.

Klopp's two worst losses in charge at Anfield have both come at the hands of City, who also thrashed the Reds 5-0 in September 2017, but Reds' supporters are unlikely to be too disheartened given their position in the table.

Liverpool will now have to pick themselves up again ahead of a meeting with Aston Villa on Sunday, while City gear up for a tough trip toSouthampton.