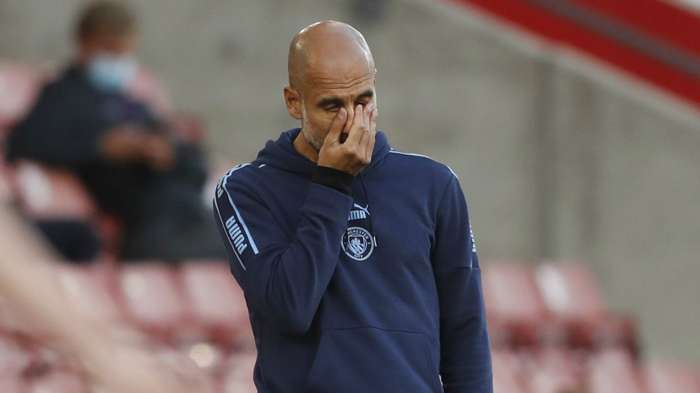 Manchester City’s defeat at Southampton set an unwanted career milestone for boss Pep Guardiola, who has now lost three consecutive away league games for the first time as a manager.

Guardiola’s side had 74 per cent possession and the better of the chances on the south coast, managing 26 shots at goal and winning 13 corners, but came up against a well-marshalled Southampton rearguard.

Even when they broke through the Saints backline they found goalkeeper Alex McCarthy in inspired form, meaning Che Adams’ long-range lob over Ederson in the first half was enough to give Ralph Hasenhuttl’s side all three points.

The defeat in west London also relinquished the Premier League trophy to Liverpool after back-to-back title successes at the Etihad Stadium, with Jurgen Klopp’s side now 23 points clear at the summit.

City sent out a message with a 4-0 victory over Liverpool at the Etihad Stadium on Thursday, their fourth successive home win without conceding a goal, but this latest defeat on the road means they have now lost nine Premier League games this season, the most they have lost in a single campaign since losing 10 matches under Manuel Pellegrini in 2015-16.

City finished in fourth place that year with 66 points, the same as their current tally, with Guardiola succeeding the Argentine in the Etihad hot seat that summer.

Though the league has proven to be a disappointment for City, they could still end the campaign with three trophies. Having retained the Carabao Cup in March, Guardiola’s side beat Newcastle at St James’ Park last month to set up an FA Cup semi-final date with Arsenal at Wembley.

They also hold a 2-1 lead over Real Madrid after the first leg of their Champions League last-16 clash, with the second leg scheduled to take place when European football returns next month.