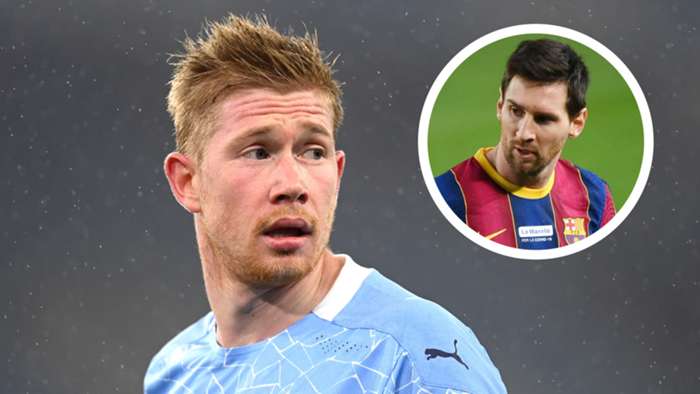 Manchester City have been warned by Trevor Sinclair that ongoing talk of a possible move for Lionel Messi could complicate matters when it comes to contract discussions with Kevin De Bruyne.

There is no rush on that front for City, with De Bruyne already tied down until 2023, but the Blues would like to put an extension in place.

Sinclair, though, believes a lack of progress on that front is down to a star turn in Manchester wanting pay parity with the very best in the business.

That would be Messi if Pep Guardiola is able to put a reunion with the Barcelona superstar in place, with it still being suggested that the mercurial Argentine could head to England as a free agent in the summer.

“De Bruyne hasn’t even got an agent, he’s acting for himself, which I think is fantastic,” former City winger Sinclair told talkSPORT.

“He knows his worth; if you don’t know your worth at 29 years old then you’ve got something wrong.

“He probably knows what the ball-park figure is that he wants to be earning; he’ll want to be the top-paid player at the football club.

“But what he might’ve said is that he wants to be the top-paid player regardless of who comes in. That’s a problem for City if they’re serious about signing Messi.

“De Bruyne’s wages could go up an astronomical amount if he wants to be on bigger wages than Messi.”

City are not the only side to be keeping a close eye on goings on at Camp Nou, with a stunning saga in Spain keeping everyone guessing.

Messi will see his current deal expire at the end of the season, meaning that he could sever ties with the only club side he has represented in a record-breaking career, and a move to an ambitious Premier League heavyweight would hold obvious appeal.

Paris Saint-Germain are also said to be keen, as one of the few other sides in world football that could afford to finance a deal, with some big decisions approaching for a six-time Ballon d’Or winner.

Sinclair has previously stated that he considers a switch to City to be “inevitable” for Messi, and the ex-England international added when asked if he still believes that to be the case: “I do, yeah. There’s been a bit of a lull, but I don’t think he felt comfortable leaving over the summer.

“He’s keeping his head down, working hard, but when it comes to the end of the season, there’s a clause in his contract whereby if he activates it at a certain time in the year, he goes on a free.

“There will be a lot of clubs interested… Man City and PSG, he just takes your club to another level.