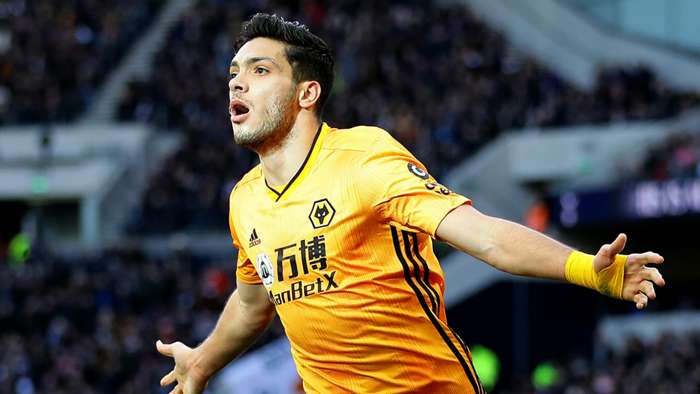 Raul Jimenez insisted he was "very happy" at Wolves amid links to Manchester United.

Jimenez, 29, is enjoying another prolific season, scoring 24 goals in 47 games for Wolves to lead to apparent interest from United.

But the Mexico international said he was happy at the Molineux, where he arrived from Benfica in 2018, initially on loan.

"It feels very good. Two years here have been unbelievable, I think we made that connection since the beginning, since my transfer here," Jimenez said, via the club's website.

Jimenez has been keeping the exit door propped open in recent months , admitting any interest from Barcelona or Real Madrid would be difficult to ignore . He has also spoken of his pride at earning links to domestic rivals of Wolves, with his price tag said to have soared to around the £90 million ($111m) mark.

The Mexican is enjoying being swept along for the ride at present, with no definitive call on his future offered once again when discussing the speculation he is generating withTelemundo.

“First of all I am very happy here with the Wolves,” Jimenez said last month. “I am in a place where from the first moment we made an incredible connection.

“It is good to know that they are talking about you, but what I have to do to make that happen is to continue doing my job here with the Wolves.”

Jimenez has helped Wolves sit sixth in the Premier League, with his team-mate Adama Traore also attracting interest from elsewhere.

The forward praised Traore, who has scored four goals and provided nine assists in the league this season.

"Every striker wants a team-mate with his conditions. He can cross from anywhere, you know he's going to be at the final line and he's going to cross, so you have to be there at the right time to score," Jimenez said.

"We train on it in the week. We talk to each other before the games, or in the training sessions, so we know where we’re going to be, his crossing and where I have to move.

"It's not a coincidence, it's something we train and work for."