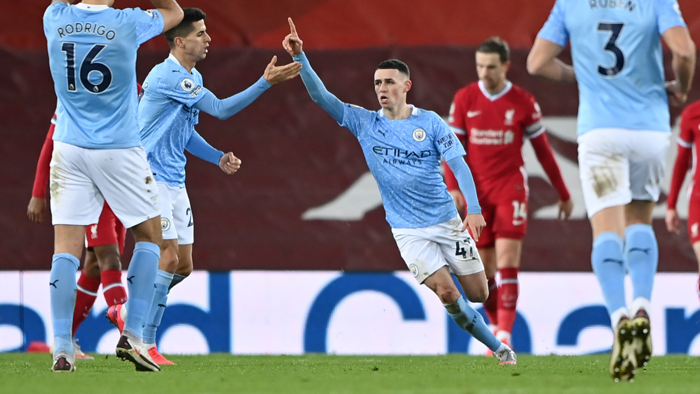 Manchester City wrote yet another page in the history books with their stunning 4-1 victory against champions Liverpool on Sunday.

The win moves Pep Guardiola’s side five points clear of Manchester United at the top of the table and 10 points ahead of Liverpool in fourth.

City’s win on Merseyside was their 14th successive victory in all competitions, equalling the all-time winning record by an English top-flight side.

They now sit alongside Preston in 1892 and Arsenal in 1987 in the record books.

The last game they failed to win was against West Brom at EtihadStadium on December 15.

Jurgen Klopp’s side have now lost three successive top flight home matches for the first time since 1963, following 1-0 defeats at the hands of Burnley and Brighton.

They are the first side to lose three straight home league matches in the following campaign after winning the English top-flight since Chelsea did so 65 years ago in March 1956.

The Londoners would end that campaign down in 16th place.