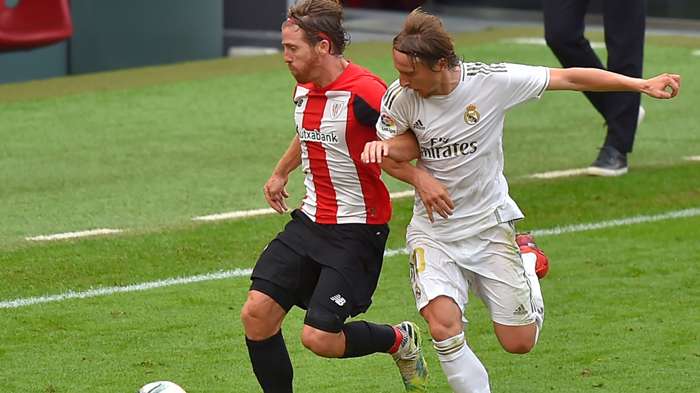 Madrid were made to work hard for a 1-0 victory on Sunday - their seventh win in a row - as Zinedine Zidane's men moved seven points clear at the top of the La Liga table.

But Athletic were unhappy with the award of the spot-kick from which Ramos clinched the points, with Dani Garcia's trip on Marcelo spotted only after a VAR review.

Muniain was particularly frustrated as there was then no similar call made at the other end of the pitch when Ramos appeared to step on Raul Garcia's foot off the ball.

He said: "Raul Garcia has been stamped on and they haven't even reviewed it. That's the difference.

"We've seen the theme in these weeks since the restart -depending on which teams it is, some decisions are given.

"Everyone can draw their own conclusions."

It was the third time in four matches in which Madrid have scored from the penalty spot, on each occasion netting the winner in one-goal victories.

Barcelona stalwart Gerard Pique has previously suggested it would be difficult to stop Madrid winning the title because decisions too often go their way.

Meanwhile, Real Madrid head coach Zinedine Zidane said he is bored of the constant scrutiny his team is under.

"I am tired of being told that we won because of the referees," he said.

"This is not going to change. But the players deserve respect. Nothing is going to take away from our goal."