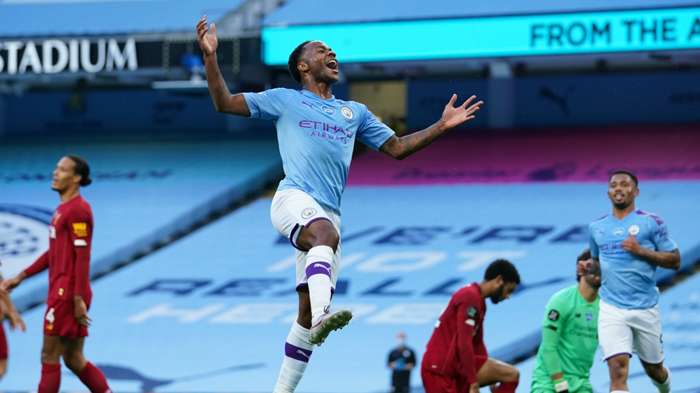 Raheem Sterling insisted that Manchester City are in the process of "evolving" after beating newly-crowned champions Liverpool 4-0, while also stating that "next season started today".

City gave the Reds a guard of honour as a mark of respect for their first league title triumph in 30 years, before proceeding to hand them their second defeat of the campaign.

Kevin De Bruyne opened the scoring from the penalty spot, before Sterling finished off a swift counterattackto double scoreline just after the half-hour mark.

Phil Foden added a third for the hosts, firing past Alisson in the Liverpool net after playing a neat one two with De Bruyne on the edge of the box.

City continued to push for more goals in the second period, and Sterling thought he had grabbed his second in the 66th minute as he saw his seemingly goalbound shot diverted into the far corner by Alex Oxlade-Chamberlain.

The strike was ultimately credited as an own goal for Oxlade-Chamberlain, and substitute Riyad Mahrez also saw a late effort ruled out due to Foden's handball in the build-up.

The match finished 4-0 , which flattered Liverpool considering the number of chances Pep Guardiola's men created, and Sterling was in high spirits in his post-match interview.

Asked how motivated City were to get one over on the 2019-2020 Premier League winners, the 25-year-old told Sky Sports: "They (Liverpool) have been brilliant all year, we wanted to have a good game against them.

"We knew we were behind, have been disappointing at times. We had a test against the current champions to make a point and we did brilliantly. Next season started today and we did well.

"This is a team that is evolving and changing, you can see the maturity Phil (Foden) is playing with. I think in the future we have some great players."

Guardiola will now start preparing his players for a trip to St Mary's to face Southampton on Sunday, which comes three days before a home clash against Newcastle.