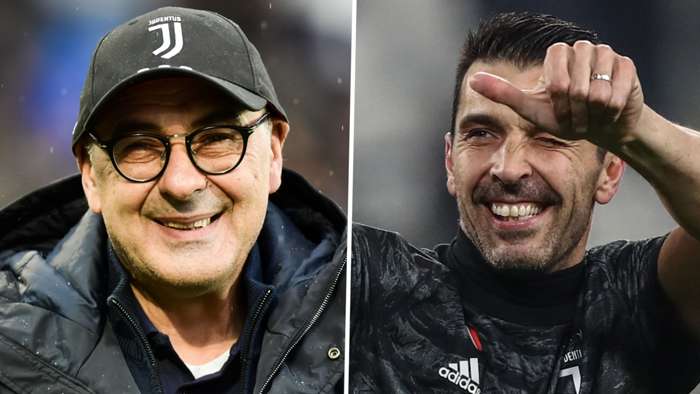 Maurizio Sarri said the only suitable way to hail Gianluigi Buffon is with applause after the veteran goalkeeper set a new Serie A record on Saturday.

Buffon made his 648th appearance in Italy's top flight as Juve cruised to a 4-1 victory over Torinoin the Turin derby, breaking the record previously set by his former Italy team-mate Paolo Maldini.

Juve's victory and Lazio's subsequent defeat to AC Milanmeans Sarri's side are now seven points clear at the top of Serie A with eight matches remaining.

But when asked to describe Buffon, who signed a one-year extension with Juve in June, Sarri said the 42-year-old can only be applauded, with his legendary status already assured.

"Everyone can just congratulate with Buffon for what he did during his career," Sarri said ina news conference.

"He's a legend. No words needed, just applause. That's how we welcomed him in the changing room today, no words needed. Look at his numbers, he is a legend."

One player who will be leaving Juve at the end of the season is Miralem Pjanic, the midfielder heading to Barcelona with Artur coming the other way.

Pjanic was taken off shortly after half-time in the derby, but Sarri insisted it was not to do with his performance, but instead related to a booking the playmaker had received towards the end of the first half, with Torino then pulling one back to make it 2-1 in stoppage time.

"Pjanic received the yellow card and he was one I was the most nervous on the pitch because the penalty given to Torino," Sarri added.

"That's why I decided to change him, I didn't want to risk a sending off."

Juventus, who have now won seven straight Serie A games, are next in action against AC Milan on Tuesday.