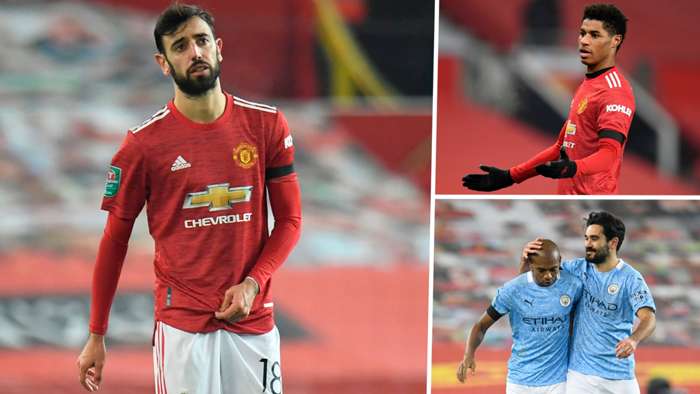 But, for the fourth time in a row, Solskjaer's side came up short in a semi-final.

"It's not psychological," the manager insisted. But it's becoming a habit and such habits can be sometime hard to kick.

United gave everything on the night but could have no complaints after succumbing to second-half strikes from John Stones and Fernandinho. They knew it too.

As City celebrated on the Old Trafford pitch after setting up a Wembley showdown with Jose Mourinho's Tottenham, United’s players had already gone straight down the tunnel.

There was, of course, no crowd, meaning no point in sticking around. But there was an understandable desire to just put this defeat behind them. There was no time for despair or sadness. They know they need to move on, and quickly.

Solskjaer has regularly spoken of the need for this troops to get their hands on that first trophy of his tenure to restore the club's winning mentality. “It gives you hunger to get more,” the treble-winner said.

However, another shot at silverware has slipped away, meaning the hope now is that they use this pain to propel them forward in a season which still holds so much promise and potential glory.

Certain issues will need to be promptly addressed, though. Solskjaer likes to talk about fine margins being the difference between success and failure but the space Harry Maguire left for Stones to put Pep Guardiola’s side ahead was more of a gaping gulf than a fine margin.

The United captain was back alongside Victor Lindelof, who had returned from his back complaint to replace Eric Bailly at the heart of United's defence, and the pair had looked assured during an opening half City dominated in terms of possession (68 per cent).

However, Maguire was caught napping as Phil Foden’s free kick drifted past everyone in the box before Stones bundled the ball past David de Gea from close range.

Victory for the visitors was ensured in the 83rd minute, as Aaron Wan-Bissaka failed to deal with a corner and Fernandinho rifled home from the edge of the area. In truth, it was just reward for an improved second-half showing from City.

Guardiola’s side ultimately found a way to win, like all great champions. United, by contrast, just did not look capable of producing a decisive moment in what was an intriguingly balanced contest for long periods.

Progress is clearly being made, as underlined by United's recent Premier League form, but they need to take that next step; they need to prove they can win trophies. They can’t afford to keep falling at the semi-final stage.

City have gone up a gear since that dour draw at Old Trafford at the tail end of last year and if United are going to beat them, and Liverpool, to the title this season, then they’re going to have to respond in kind.

Too many players failed to raise their games here. A quiet night for Bruno Fernandes cannot mean a quiet night all round for United’s forwards.

Anthony Martial and Marcus Rashford showed some nice movement against City but not enough to create clear-cut chances, with Rashford guilty of getting himself caught offside too many times.

In the end, for all their endeavour, United managed just two shots on target, both of which were Fernandes efforts from outside the area.

The key now is how United deal with this disappointment because they can't afford to feel sorry for themselves. There is an FA Cup tie with Watford to come on Saturday before two massive games, against Burnley and Liverpool, to follow next week.