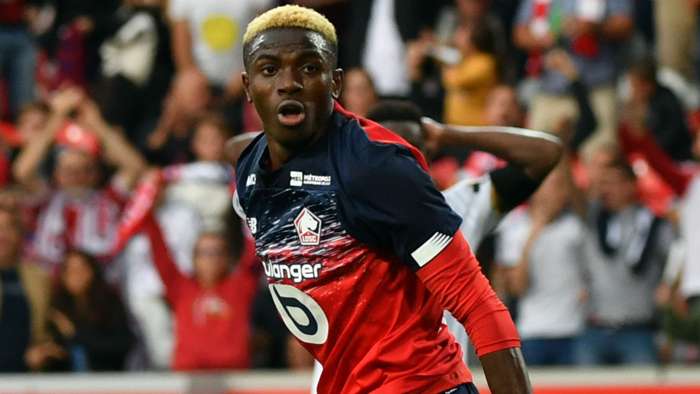 Victor Osimhen "is precisely the type of footballer that Napoli needs", according to Dries Mertens, who has backed the club to bring in the Lille striker this summer.

Few could have predicted the impact that Osimhen would have in Ligue 1 when he arrived at Lille fromCharleroi for €12 million (£11m/$13m) in August 2019.

The 21-year-old was targeted after the departure of club talisman Nicolas Pepe, who completed a £72 million ($90m) move to Arsenal after an outstanding season at Stade Pierre Mauroy.

Osimhen has filled Pepe's boots admirably, scoring 18 goals in his first 38 appearances in all competitions to help Lille finish fourth in Ligue 1, while also competing in the Champions League.

The Nigerian frontman's performances have not gone unnoticed among Europe's elite clubs, with the likes of Juventus, Napoli, Liverpool and Tottenham among those taking an interest in his services in recent months.

Napoli are reportedly leading the race for Osimhen's signature, with the Lille star's agent confirming he has already been in contact with the Italian giants over a potential move.

Mertens would welcome the talented forward's arrival at Stadio San Paolo, having been made aware of his unique abilitieswhile he was still on the books ofCharleroi.

"My friends from Charleroi told mehow well he played before going toFrance," the Napoli talisman told Il Mattino. "I don't know if he will come,butin any case, heis precisely the type of footballer that Napoli needs."

Mertens went on to express his hope thatJoseCallejon remains at Napoli beyond the end of the season, with the midfielder'scurrent contract set to expire this summer.

The 33-year-old added on his team-mate's future: "I tried to convince him to stay, and I'm still trying, I'm not giving up.Losing a friend like him would be sorry but also giving up a teammate and an extraordinary professional like Joseis not easy. I don't know what will happen. There's still time."

Napoli have been in good form since the resumption of the Italian season in early June, winning two of their three Serie A fixtures after beating Juventus in the Coppa Italia final.

Mertens is hoping Gennaro Gattuso's men can build on that platform to reach even greater heights in the coming years.