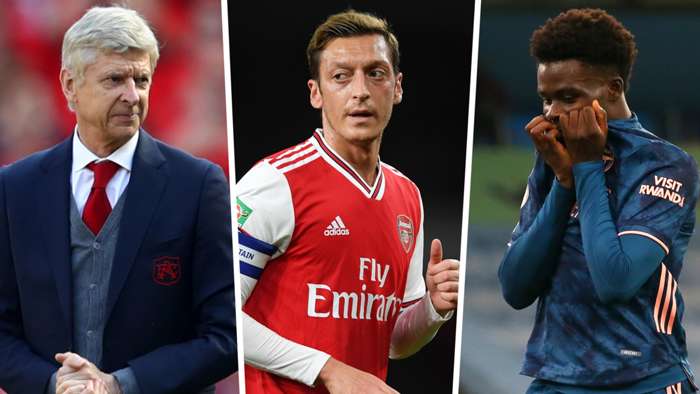 Mesut Ozil will not be remembered as an all-time great at Arsenal, says Ray Parlour, with the former Gunners star of the opinion that Arsene Wenger and Bukayo Saka are next in line for statues at Emirates Stadium.

A deal in the January window is said to be on the cards, with Mikel Arteta having left a door open for Ozil by freezing him out of his plans in 2020-21.

The former Germany international will see a lucrative contract expire in the summer if he does stick around, allowing him to hit the free agent pool, with a long-running saga approaching a conclusion one way or another.

Ozil will depart after eight seasons at Arsenal that have delivered 254 appearances, 44 goals, 77 assists and three FA Cup triumphs.

It has been suggested that, despite his struggles for consistency, he should be held in higher regard by the Gunners, but Parlour is not convinced that his efforts will live as long in the memory as some of those that will have graced the club before and after him.

“He (Ozil)is a very talented player, but the consistency wasn’t there for him,” Arsenal legend Parlour told talkSPORT.

“If you go back to some of the opportunities where he’s playing in big games and you need to shine as a leader and he didn’t. He sort of went missing in games.

“But statue? They’ve got the right three at the moment, absolutely. There’s Thierry Henry, Dennis Bergkamp and Tony Adams.

“I wouldn’t look at any players at the moment who deserve a statue.

“I’d go back to probably Cesc Fabregas was a better player than Ozil with what he achieved at Arsenal. Then you look at Aaron Ramsey before he left, he wanted to stay, but they couldn’t agree a deal.

“Jack Wilshere when he was at Arsenal, Santi Cazorla, what a player he was, you look at the career he had at Arsenal.”

Parlour added: “You look at what he (Ozil)has achieved in his career and I can see why people say he’s a legend. He’s won a World Cup.

“At times in games he was absolutely brilliant, but he didn’t do it on a consistent basis. That was his problem.

“You’ve got to do it week in, week out if you’re going to be a top, top player. Look at Kevin De Bruyne, does he ever have a bad game? If he has a quiet game, he still does something in that game to probably assist a player or maybe score a goal.

“At times when Ozil played, if he had a quiet game you didn’t see him. That was the difference between two top, top, class players.

“He’s got the ability to do that as a player. Wrighty (Ian Wright)is probably well in front of anybody to have a statue if you’re going to give statues out to players.

“But for me the next statue that goes up (for Wenger)will be the last one, unless Saka has 10 great years at Arsenal.