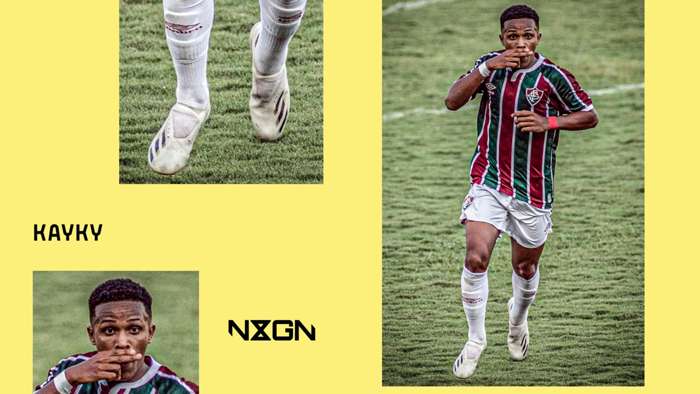 Brazilian football can boast some of the best academies in world football, and Fluminense is no different.

And yet, over the course of the last 12 months, it has become clear that a new 'golden generation' of talents is about to emerge, led by a player some have christened 'the left-footed Neymar'.

That player is 17-year-old Kayky, who finished as the top scorer in last year'sBrasileirao Under-17 Championshipwith 12 goals, as Fluminense took the title.

Despite having not yet made a first-team appearance, those performances were enough to convince a host of top European sides, including Liverpool and Shakhtar Donetsk,of his potential.

It was Manchester City who won the race for his signature, however, with the Premier League leaders now set to fork out£9million ($12m) to sign both Kayky and his team-mate Metinho.

Reports in Brazil have suggested that City could end up paying up to £21.5m ($30m) for Kayky alone if certain landmarks are reached –a figure which would make him the most expensive sale in Fluminense history.

But what makes him so good?

“Kayky is a player who stands out a lot for his technical quality, especially with regard to one-on-ones, and also in his quality in front ofgoal," Fluminense's U17 coach,Guilherme Torres, tellsGoal.

"He is also very intelligent, searches for empty spaces on the field and has a good ability to provide assists for his team-mates.

"In addition, he has a winning, competitive mentality, which is important for a high-level player. His resilience has grown as he has matured, and he is learning how to deal with adversity."

Indeed, Kayky has never been any stranger to adversity.

At the age of eight, he failed in an attempt to join the Fluminense futsal team in a set-back that could have ended his dreams of one day reaching the highest level there and then.

But supported by his father, Demir – to whomKayky now dedicates all his goals with his 'moustache' celebration–he instead joined the team at the famous Mangueira samba school, an institution that is traditionallybetter known for being a regular winner at the Rio Carnival thansporting prowess.

It was there, though, that Fluminense's scouts came across him once moreand, after watching him star in a match that actually resulted in defeat for Mangueira, he was enrolled inthe club's academy system.

Though naturally left-footed, Kayky has found a home for himself on the right-hand side of attack in recent years, with his pace, close control andtrickery making him a nightmarefor opposition full-backs.

City are now keen to hone those skillsin the coming years, though they will have to be patient, with Kayky not allowed to leave Brazil for his new club until his 18th birthday in June.

For the time being, then, there is hope among Fluminense supporters that they will get the chance to see both Kayky and Metinho earn first-team debuts for their boyhood clubs before they depart.

Quite where they will go from there remains up in the air, with City's ever-expanding City Football Group meaning that both players may first spend time with one of their sister clubs, just as U17 World Cup-winning midfielder Diego Rosa is currently doing with Belgian second division side Lommel following his move from Gremio in January.

Reports fromGloboesportehave claimed that central midfielder Metinho could be set for a spell in France with Troyes when he arrives in Europe, but that Kayky's talent is such that 'the left-footed Neymar'could be heading straight for Manchester.

Kayky vowed following last year'sU17s title win that he and his team-mates "will give a bright future to Fluminense".