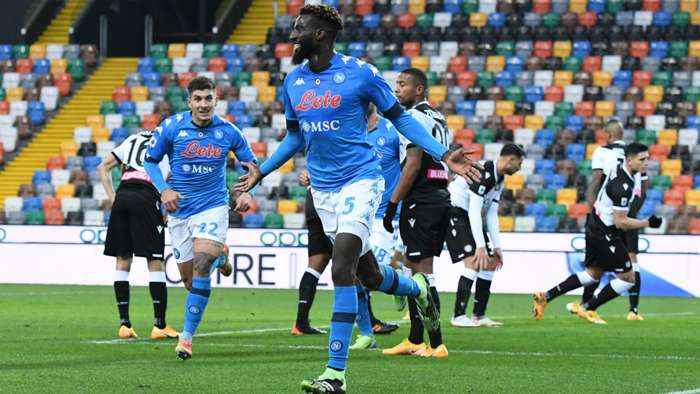 Tiemoue Bakayoko’s preference is to remain at Napoli rather than return to Chelsea when his loan spell comes to a conclusion in the summer.

With little prospect of forcing his way into Frank Lampard’s plans in west London this season, Bakayoko headed out on loan to Napoli.

The Naples club are sixth in Serie A and battling to barge their way into the title race. Their prospects were boosted with a 2-1 win at Udinese on Sunday, which came courtesy of a last-minute winner from Bakayoko - his first goal for the team.

The player’s agent was quick to talk up the France international, and said the aim is to remain in Italy with Napoli.

“He is very happy to score his first goal for the club, it’s been a long time since he had scored the last one,” his brother and agent Abdoulaye told Radio Marte. “The goal has boosted his confidence;he always wants to help the team.”

Talks have yet to take place with Napoli or Chelsea over the 26-year-old’s future, but his agent feels everything is in place to forge a career where he is at the moment.

“It’s too early to talk about that (a permanent move), there are many things that must be considered," the player's representative said. “He is on loan until the end of the season and he hasn’t talked to the club yet, but staying at Napoli would be a nice opportunity, so we willsee.

“He has played for many clubs, but he is happy at Napoli.The results are there and this club would be an ideal option for the future.

“Napoli are title contenders;a positive ending is in everyone’s interest. Napoli will be his priority in June.”

Napoli are nine points adrift of Serie A leaders AC Milan, although they do have a game in hand.