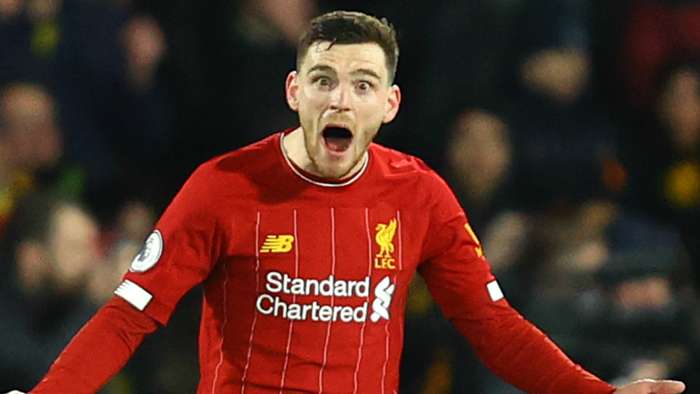 Andrew Robertson has admitted that Liverpool had an "off day" during their thrashing against Manchester City, but says the final result might have been different had they taken their chances.

Liverpool picked up their first league crown in three decades after City's 2-1 defeat at Chelsea on June 25.

Jurgen Klopp's men became the first side to win the trophy with seven games remaining after that result, but City gained a small slice of revenge a week later at Etihad Stadium.

Pep Guardiola's players lined up to give Liverpool a guard of honour before their meeting last Thursday, and then proceeded to take the Reds apart with a superb show of attacking power.

City disrupted the Reds' title party by securing a 4-0 victory, which reduced the gap between the two sides at the top of the table back down to 20 points.

Theythen fell to a disappointing 1-0 defeat in their next outing against Southampton, which allowed Liverpool to restore their original advantage courtesy of a 2-0 victory over Aston Villa.

Robertson was delighted that the champions were able to "bounce back" quickly after a "frustrating performance" at the Etihad which saw them subjected to plenty of criticism.

He told Liverpool's official website: "Thursday was a frustrating performance. We weren’t happy with certain areas of our game. It was a strange one.

"I think over the last five or six games we’ve played against Manchester City that might have been the most chances we created against them, and in the first 25 minutes, we could easily have went one or 2-0 up.

"Obviously when you don’t take your chances we are playing against a team that has got nothing really to lose and they went out and took their chances, which we didn’t.

"In certain areas, we could have done a lot better, of course we could have, but it was important not to overreact. We are champions in our own right, and that game made us 20 points clear of that team so that shows you how well we have done this season.

"We can all have off days and yeah, we didn’t like it, but we managed to bounce back today. It might not have been the best performance in the first half but you are playing against a team that is fighting for their lives and relegation and I know how that feels.

Robertson appeared to pick up a late knock during the win against Villa, but he played down the issue when asked if he might be a doubt for Liverpool's upcoming clash with Brighton.

“I’ve just got a bit of a dead calf just in the challenge with Grealish with about 20 minutes to go, just a tangle of legs and I got a dead calf," said the Scotland international. "We’ll be good to go, it’s a hectic period and we need to keep as fresh as we can.

“Obviously after 13 weeks off we’ve now got three weeks of a lot of games, so that’s what the squad is for. We made four subs today and every single one of them had a massive impact and we made three changes to the starting line-up, so we’ll wait and see what the manager does on Wednesday.