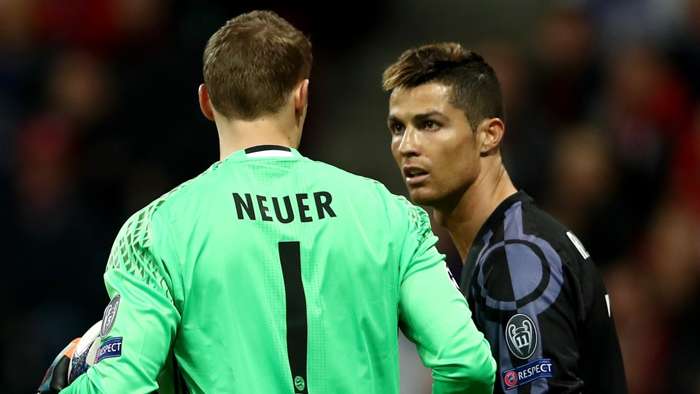 Manuel Neuer welcomes the “special challenge” of facing forwards such as Cristiano Ronaldo, with the Bayern Munich goalkeeper claiming that the best in the business hold no fear for him.

With Bayern and Germany, the 34-year-old has graced the very top of the game and collected just about every major honour available to him.

Neuer’s reputation often goes before him, allowing him to get into the heads of opponentswith even five-time Ballon d’Or winners such as Ronaldo given the same treatment as any other rival.

The Bayern shot-stopper has told 51 magazine of facing theformer Manchester United and Real Madrid superstar who remains a fearsome European foe at Juventus: “The difference is that I know Cristiano Ronaldo better than many others from our many duels. I'm not saying: 'Oh, here comes Ronaldo, I must be scared.'”

Neuer added on the “special challenge” posed by theone-on-one “mind game” as opposing forwards close in on his goal: “Don't get me wrong, I'm not keen on situations like this, I'm primarily thinking of the team, but if I can prove myself, I want to be there.”

Neuer is considered to embody what a modern day goalkeeper is all about, with the iconic German having been a No 1 that is as reliable with his feet as he is with his hands long before ball-playing options between the sticks became more common.

He added on the mentality that he has adopted throughout hisremarkable career: “The striker is the first defender, they always say - I think the goalkeeper should be the first attacker these days.”

Neuer considers it his job to “control the space behind the defence” as a sweeper keeper, with his efforts at the back allowing those in front of him to conserve energy for when they need it most.

He said: “The fact that I am practically an energy saver for the team in this way is one of many positive aspects to this side.”