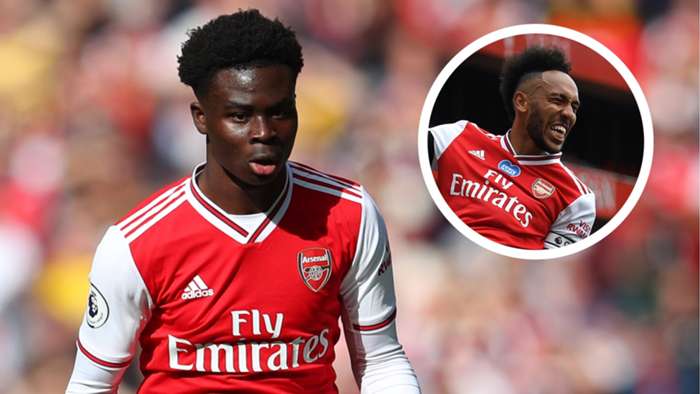 One down, one to go!

Contract talk has dominated the headlines at Arsenal in recent months, with the futures of Bukayo Saka and Pierre-Emerick Aubameyang very much up in the air.

But on Wednesday, Saka put an end to all the speculation when he signed a new long-term deal with the Gunners, committing his future to the club until the summer of 2024.

Attention will now turn to Aubameyang, and whether he follows suit will go a long way to deciding if Arsenal can start competing again towards the top of the Premier League over the next couple of seasons.

Mikel Arteta has already stated that he wants to keep hold of the striker at "all costs",and talks will accelerate with the 31-year-old over the coming weeks ahead of what will now be a shortened summer transfer window.

But whatever happens with Aubameyang, Arsenal have already secured their most crucial signing of the summer by convincing Saka to stay.

That might raise a few eyebrows with people when you consider the Gabon international’s impressive scoring record since he made the move to Arsenal from Borussia Dortmund in January 2018.

But losing Saka at this stage of his career would have been a hammer blow to the club and to the Arsenal fans.

Saka is a player who has progressed through Arsenal’s academy at Hale End at an incredible rate, one who the club have invested vast amounts of time and money into to shape him into the player he is today.

He has been with Arsenal since he was seven, and thushas the club in his blood. So it would have been heartbreaking for those coaches who have helped him develop and for the supporters who have watched him progress through the ranks to lose him at this point.

“I think he represents every value that this football club stands for,” said Arteta in the aftermath of Wednesday’s announcement. “He has come through the academy, earned his respect with hard work and accountability and you can see the progression that he is having as a player but as well as a person.

“He is a player that his team-mates really like, that I admire and he has a big hunger to become even better, so I think it is the perfect thing to do right now.”

This is a deal that has been months in the making for Saka. It was obvious during the four senior appearances he made last season that he was something a bit special, but the giant strides he has made since the start of the current campaign have even caught him by surprise.

“Everything's happened so quickly,” he admitted. “I came up to Colney from Hale End last year and then all of a sudden I was playing against Manchester United in the Premier League.

“That game in September, man... I was standing on the pitch at Old Trafford before the match – it was just my second-ever start in the Premier League – and it finally hit me: I'm in the Arsenal first team.”

He hasnever looked back since. Saka was an unused substitute during Wednesday night’s 4-0 success against Norwich City, with Arteta taking the chance to rest the youngster who has made 33 appearances in all competitions this season.

He has three goals to his name and 11 assists. No teenager has hit that number in a single season for Arsenal since Cesc Fabregas in 2006-07.

The fact he has done that in a year which has seen him play under three different coaches and be deployed in several different positions, including a prolonged spell at left-back, speaks volumes for his quality.

No matter where he plays, he performs. And for a player of his age that is very exciting.

"I love playing for Arsenal,” said Saka, when asked why he had extended his contract. “I love playing for the coach, the fans, my team-mates, I really believe in the philosophy that the boss is bringing and what he's building, and I'm just really excited to see where he's going to take us in the future.”

Whether that future is alongside Aubameyang remains to be seen. That issomething that will be decided later in the summer.

The Arsenal skipper showed his quality again on Wednesdaywith two more goals in the win over Daniel Farke's relegation-threatened Canaries.They were his 50th and 51st goals in the Premier League, scoringthem in just 79 appearances. No Arsenal player has hit that mark quicker.

Aubameyang's record in front of goal cannot be questioned, and for Arsenal it isvitally important that he also puts pen to paper in the coming months. If Arteta’s side are to challenge again in the near future, then Aubameyang will be key to that.

Speaking after the Norwich game, Arteta said: “Auba knows really well what my thoughts are towards him and the project that I want to create, and how much he is part of that. After that it is not in my hands.

“I am positive and I will remain positive that we can keep him here for many years, but things have to progress.”

The importance of Aubameyang to Arsenal canotbe underestimated, but in terms of the long-term, keeping hold of Saka was the most important piece of business the club could have done.

As painful as it would be to see Aubameyang go, seeing Saka leave at just 18 and then having to watch him get even better over the course of the next decade while playing elsewhere would have been excruciating for everyone connected with Arsenal.

But that danger has now passed. Saka has signed, and both he and the club can now look forward to the future together.

Whether Aubameyang is part of that future remains - like the striker in mid-celebration - up in the air.